What underwater sounds tell us about marine life

First published on Mongabay with sound recordings from Malvan.

The water appeared opaque the deeper we travelled. An occasional peach-coloured butterscotch jellyfish would emerge from the depths, the bell breaking the surface to tread water, with its tentacles swirling below. In seconds, it would disappear from sight, as if pulling shut an undulating, bottle green curtain behind it. In comparison to the activity on the coast, in Malvan, Maharashtra, the water seemed deceptively quiet.

Because beneath the surface, early morning bulletins were already underway; we just weren’t invited to the conversation. But humans have been gate-crashing wildlife parties for centuries, so there we were, waiting to eavesdrop on the latest.

An hour went by on the 23 km Sarjekot-Nivti route that we were on, before one of our crew pointed towards the deep – “Sousa”. Fins broke the surface first, then grey, rounded, half moons, disappearing and appearing in a coordinated sequence. The small fisher boat, our research vessel, erupted with activity as we moved closer to the pod of Indian Ocean humpback dolphins, Sousa plumbea, and marine biologist Isha Bopardikar dropped the hydrophone into the water.

I put on one of the earphones. At first, I was listening to too much. A loud persistent crackling and snapping. I looked at her in delight.

“No, shrimps,” she said, rolling her eyes at the constant noisemakers in her research. Apparently, shrimps have been incorporating themselves in underwater research the world over. They’re like the loudest people at a party, continually talking over the person you’re trying to listen to. But then, a series of high-pitched clicks, squeaks and whistles shot through the clutter and Bopardikar signalled thumbs up. And just like that, I was listening to dolphins. 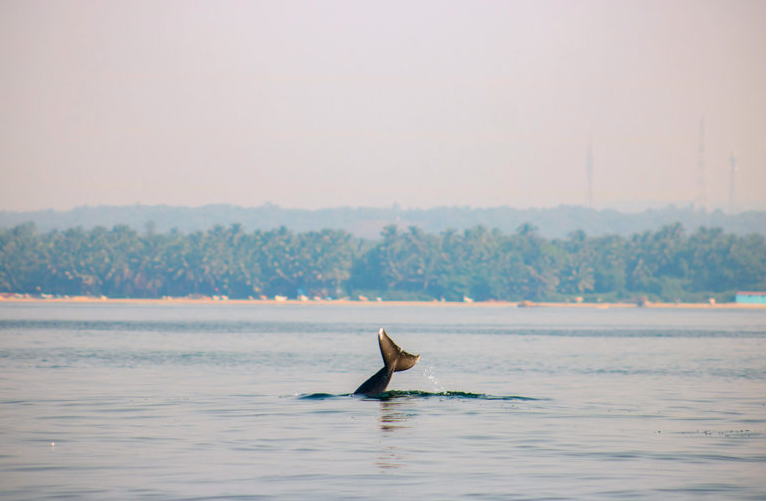 An Indian Ocean humpback dolphin (Sousa plumbea) rising above the surface near the coast in Malvan, Maharashtra. Photo by Sarang Naik.

(Listen to the recordings in the original piece here.

The sound was muffled, travelling through the gurgle of water but it reiterated how little we actually hear despite the constant cacophony around us. Whether it’s bats in the skies or this entire civilisation under the water, so many creatures communicate through mediums and frequencies humans are categorically excluded from.

Bopardikar took down the hydrophone data and corresponding action for each sound by the minute – foraging, deep dives, tail flips. Later, she would correlate these to understand dolphin behaviour through acoustic data under the Rufford Foundation’s Small Grant For Nature Conservation.

Acoustic research uses sound to study subjects; bioacoustics tucks biology into that fold. “Visual surveys (for whales, dolphins and porpoises) are restricted to daylight and even with calm weather, some animals are hard to see,” said Bopardikar. “We only see a fraction of their lives above water. When you’re diving, animals sense your presence. Acoustic research simply adds a device inside the water that records them without disturbance.” Sound also travels much more efficiently in water – up to four times faster than in air (depending on density, temperature and depth).

The underwater universe is a noisy place – animals communicating for threat, territory, food or to attract a mate. Now, ships, rigs, blasts have started to tear through the sound waves. When we listen in, what are we really trying to map? “We know that some of the leading causes of anthropogenic noise in the ocean are oil and gas exploration, shipping, mechanised vessels,” says Bopardikar. “But we need to collect hard data to first understand how the animals are using that space and how these factors affect their behaviour if at all.”

Her interest in the humpback dolphins arose while working on the Sindhudurg Cetacean Project four years ago, collecting data from Vijaydurg to Redi (approximately 121 km). It seemed prudent to benefit from the familiarity of Malvan for a base for this project: a healthy presence of dolphins and a relatively unexplored acoustic repertoire. They are known to inhabit shallow inshore (up to 3 km offshore) and estuarine waters exclusively, hence often overlapping with areas of intense anthropogenic activities. In that, life unfolded at the water’s edge in Malvan in a surreal mix of fish containers, evening auctions, ice factories, jet skis, tourist cars and buses that drive and park right on the beach.

Data mapping meant quiet, drowsy mornings on the boat, keeping watch and napping on the floorboards. Sometimes a flying fish would zip across or a large ray would flap on the water and sometimes for hours, the horizon yielded nothing. And some mornings were a gift from above when a boisterous pod revealed an unexpected finding. Dolphins breached the surface and the thrill of seeing the animal repeatedly leap up and out forming a perfect watery arc over the surface stunned the crew into silence. Two separate small pods of dolphins engaged in continuous tail flips and breaches, gleaming bodies diving back in almost vertically. 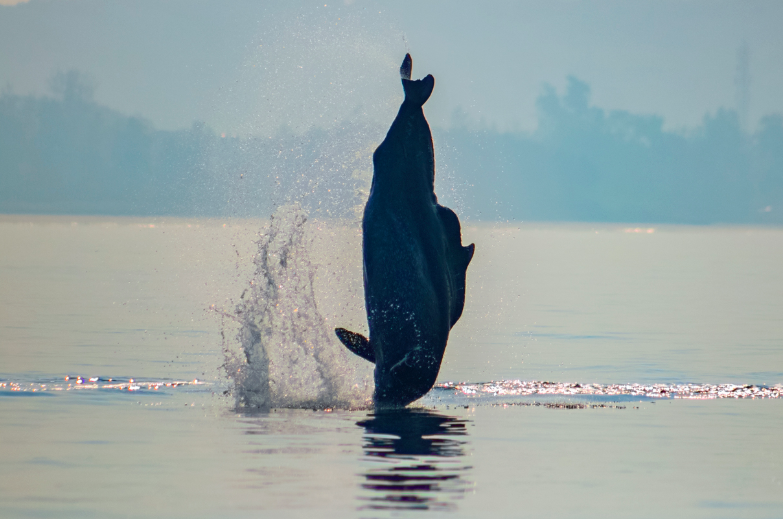 An Indian Ocean humpback dolphin nose-diving into the sea. Acoustic data from marine animals is giving us more information about their lives, behaviour and their habitats. Photo by Sarang Naik.

I expected the acoustic activity to be off the charts, instead, it was largely silent except for a few clicks. Despite the visual action, all the sound was above board – the splash of the water as they crashed back in, and the enchanting ‘whoosh’ of their breathing. “They make more whistling sounds when there are calves, juveniles and sub-adults in the pod for social communication,” said Bopardikar, “and those would most likely be large pods. Smaller groups make less social sounds depending on their behaviour. They all use echolocation clicks to find prey and to navigate their surroundings. Signature whistles have been observed across dolphin species so it is likely, not certain, that Sousa plumbea could be using these to convey individual identity.”

Listening to this underwater symphony requires skill, something Bopardikar started learning opportunistically during the Sindhudurg project. “Later, I researched different types of software, explored Raven, a sound analysis software (developed by the Bioacoustics Research Program (BRP), Cornell Lab of Ornithology, Cornell University), and spent a month at BRP at Cornell University to learn how to ‘look’ at sound and analyse it from Dr. Holger Klinck. “He is my advisor for the acoustic part of this project and Dr. Dipani Sutaria, marine researcher, guides with the behaviour input. It’s a good, solid combination.”

Most of Bopardikar’s literature and help came from outside India, maybe because it is an expensive branch of research. “Most of my equipment came from BRP, Cornell. I use a dipping hydrophone that I can deploy directly off the boat, and it’s good for behavioural observations, but there are far more sophisticated recorders (depending on the research question) – static ones that are moored to the ocean floor and are excellent for long-term data collection or mobile platforms, which are ship-based or AUV (automated unmanned vehicles),” she explained. 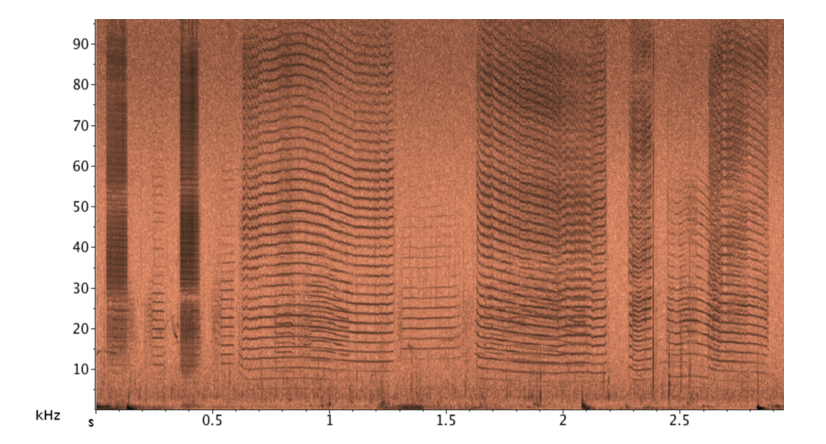 Despite the advancement of equipment over the years, there are still many unknowns in this environment, even across aquatic ecosystems. Researchers from the Wildlife Institute of India (WII) have been working on stretches in the Ganga and Brahmaputra rivers for a year and a half on the home of the Gangetic dolphin.

“The river sounds different than the sea – bubbling water, the movement of sand, friction against boulders,” said Qamar Qureshi, a professor at Wildlife Institute of India. “The adaptability of the animals is different. Evolution has factored in the murkiness of alluvial systems, and Gangetic dolphins cannot see like their marine counterparts can and depend almost entirely on sound. The water is also shallow – an average of 4 to 5 metres where we work, so there is immense, multiple refraction of sound. It’s a very complex ecosystem to record in.” The research has set out not just to understand behaviour of dolphins but to build a soundscape of the river using different types of hydrophones that record much more than animals and try and understand what is happening in the water as a whole.”

For terrestrial research, it might be possible to use simpler recorders to answer more questions partly because of easier access and familiarity of habitat. Gururaja K.V. started recording frog and toad calls in 2004 in the Western Ghats on a digital voice recorder as a taxonomic tool to identify them. This led to a first-ever audio guide (CD) on their calls from the Western Ghats – Mandookavani, launched in 2015 with his colleagues Ramya Badrinath, Seshadri K.S. and Ramit Singhal. These recordings were also put up on the India Biodiversity Portal to reach out to people. He is now attempting to understand how diversity – keeping anurans as the focal organism – varies with landscape.

For others, the use of sound is already in a process of identification and densities. Sougata Sadhukhan, researcher with WII, is working on recording wolf howls to identify individuals and standardise a statistically robust population estimation method.

Humans hear sound waves in a limited frequency range of 20Hz to 20,000Hz. Many animal sounds are above or below the range of human hearing. Photo from cochlea.org.

But can vocalisation stand alone as a research tool? Ketki Jog, who also works out of Malvan but on foraging behaviour through visual documentation says, “I am old school, in that I depend on visual data, and the emotion from it, but the truth is all the branches of research – visual, acoustics, genetics – are a means to an end, which is to understand the animal. Acoustics and genetics use reserves of visual data as a baseline, with which it is now possible to add to a pile of knowledge sharing that doesn’t need to stand alone.”

For both Qureshi and Bopardikar, the data can only start making sense in the long term, purely because the access is so limited. “There is so much happening underwater in terms of sound from rowing and mechanised fishing boats,” said Qureshi. “In some places of disturbance, dolphins recordings were silent, in others click rates increased. We are even trying to use acoustics to deter dolphins away from fisher boats and nets. There is much more data to be collected before we know whether our attempts to understand their behaviour are working.” For Bopardikar, her second season in Malvan has just begun, and while it’s a long way before she can glean a clear picture from her work, she is encouraged by the scope of her findings. 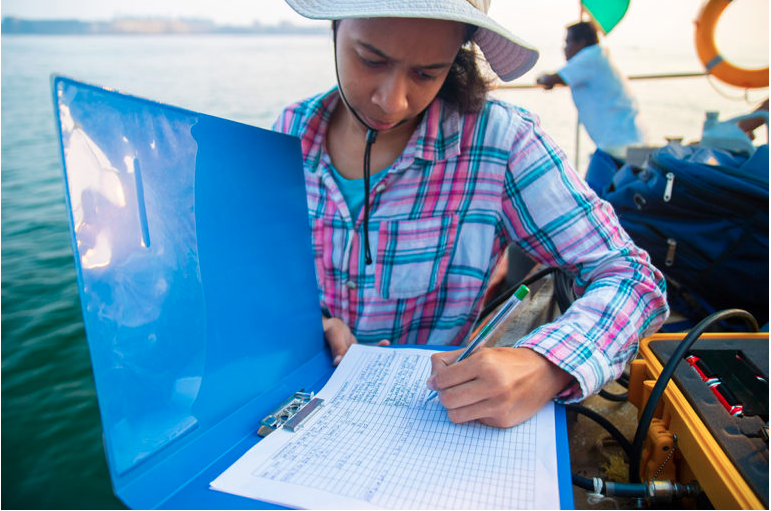 Days off the boat were spent poring over the sound data and strolls on the intertidal under the watchful eye of the Milky Way. Sea stars, sea cucumbers and the Arabian tibia lay scattered on the shore. Plate coral and zoanthids glowed in the rocky patches. Feather duster worms swayed like Christmas trees and algae – sargassum, padina, green, bubble – grew in the shallows. Small pops continually rang out while we tide-pooled. Shrimps, of course. The chatter never stops.