Reclamation work on the coastal road project is stalled owing to judicial intervention, but we need to ask what’s at stake for the city’s marine life.

A shorter version of this story is published here: https://www.thehindu.com/sci-tech/energy-and-environment/eight-questions-and-answers-about-mumbais-fragile-coastline/article26823224.ece

The promenade of Worli Seaface and the skyscrapers beyond are an unlikely backdrop — to the prettiest of corals. Pink and maroon tentacles that fringe small cylindrical bodies sit close together on one patch of the rocky shore. Yes, corals, which you’d think would live only off white sandy beaches and clear diving sites, are determinedly present on Mumbai’s polluted shore. 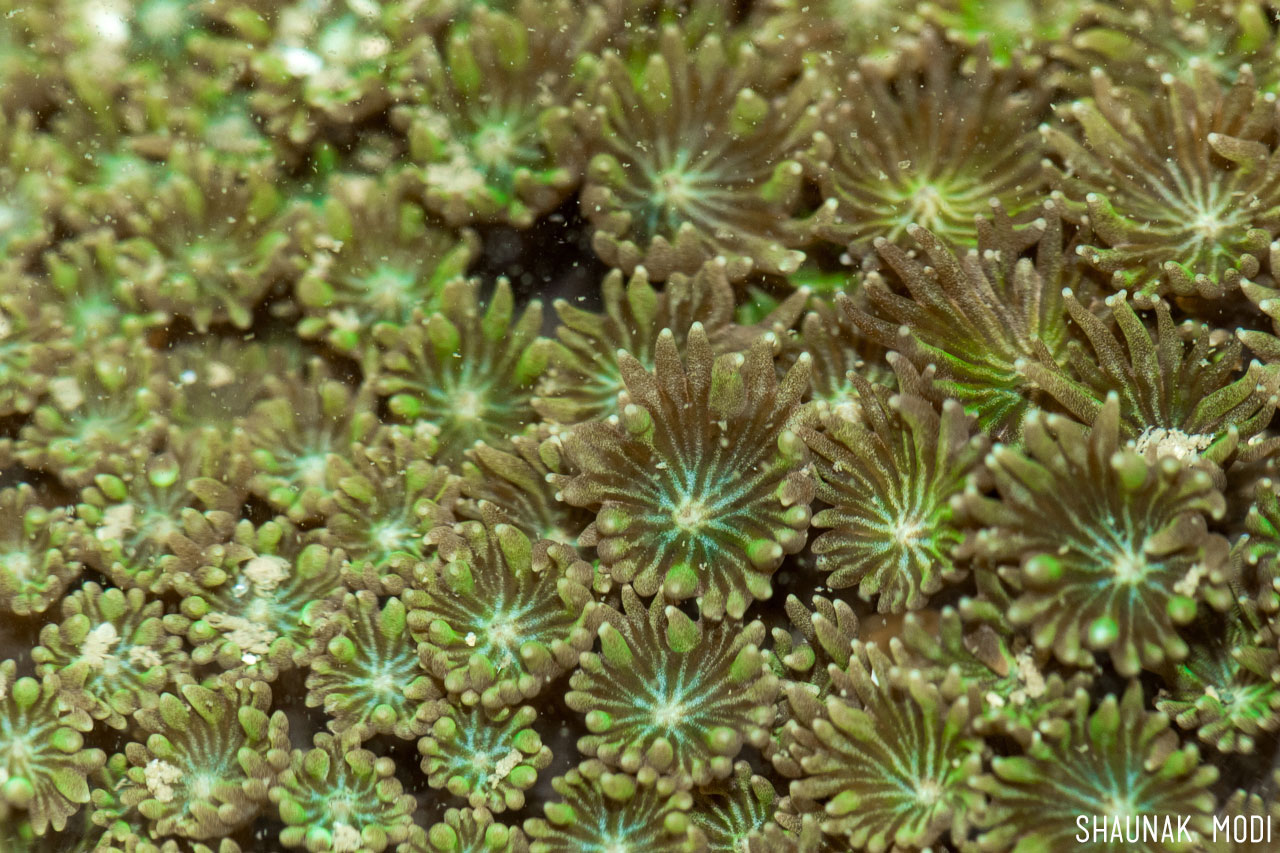 Coral is a schedule 1 species, protected at the same level as the tiger under the Wildlife Protection Act, 1972. Photograph: Shaunak Modi[/caption]

It seemed like life as usual, except that the shore had changed over the past few months. Soil-testing structures rose up and around, towering over the intertidal and reclamation had begun in lieu of the coastal road.

This week, there was some reprieve for environmental groups petitioning against the State’s Coastal Road Project. The Bombay High Court has restrained the BMC from carrying out reclamation work related to the Coastal Road Project (CRP) until April 23. But what are these groups fighting for, exactly?

Let’s break this down in a way that’s easy to understand.

Why is there legal opposition to the coastal road?

Organisations like Conservation Action Trust (CAT) and Sagar Shakti (the marine and coastal community research division of Vanashakti) have filed a petition in the Bombay High Court. The report addresses the threat that reclamation poses to the habitat and the survival of the intertidal wildlife that exists there, especially coral. Debi Goenka, Executive Trustee at CAT said, “The project still does not have environmental clearance — there is only a Coastal Regulatory Zone (CRZ) clearance whose conditions have been violated. There was no public hearing. The CRZ areas were wrongly categorised and the fact that the area was CRZ IA was never recognised. There are several marine species including corals that are found here that are included in Schedule I of the Wild Life Protection Act. No clearance has been obtained for destroying these species.”
According to a report in Scroll, Vijay Singhal, additional municipal commissioner in charge of the CRP said, “the BMC has all the requisite permissions,” and would submit them in court. 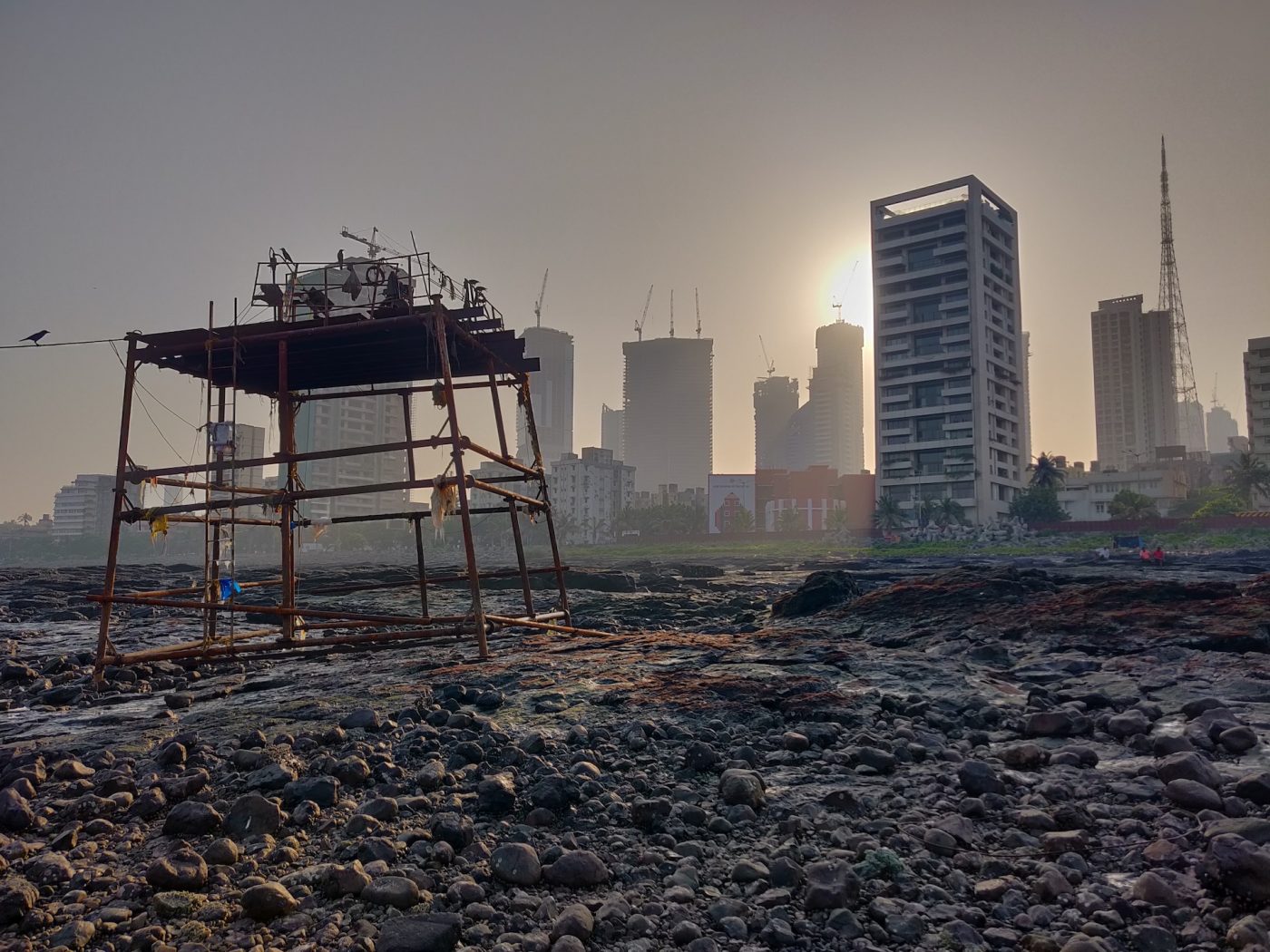 Why is the presence of coral important?

Ideally, a space hosting Schedule 1 animals is off-limits. For context, what other animal enjoys that same protection level and cannot be touched? The tiger. 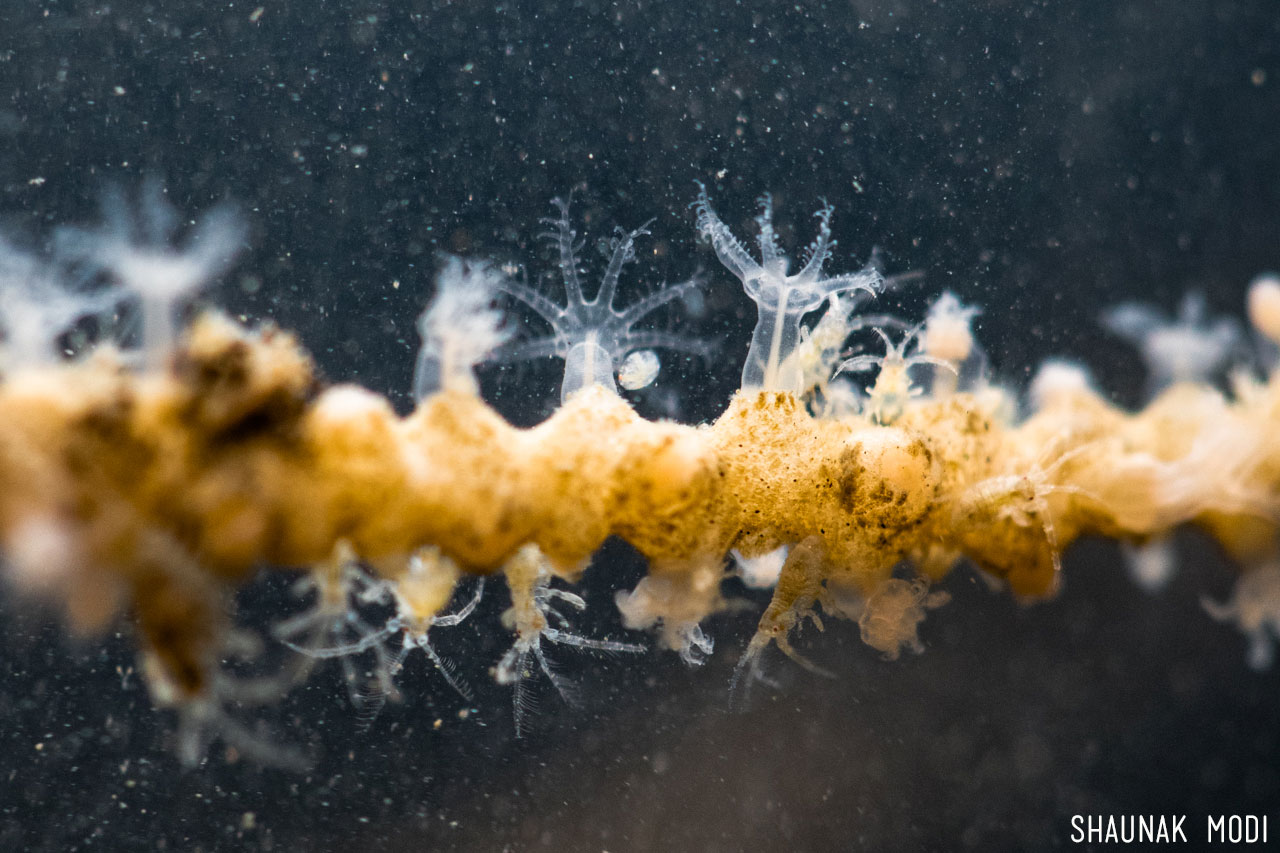 A macro shot of a Sea Fan at Juhu. Photograph by Shaunak Modi.[/caption]

How many shores is this going to affect?

While the petition is being filed for Worli, with inputs from the fishermen of the Worli Koliwada who are protesting the potential loss of livelihood all shores in the city deserve our attention. The intertidal shores at Juhu, Bandra, Dadar, Versova, Worli, Haji Ali, Neapean Sea Road, Marine Drive are likely to be impacted in different ways, either directly or indirectly.

What is the intertidal zone?

The stretch of land that is visible during low tide and submerged during high tide is called the intertidal zone. It can be sandy (like Juhu), rocky (like Haji Ali), muddy (like Sewri) to name a few.

Why is it unique?

Where else but in the intertidal will you come across all these things together – the continuous ebb and flow of water like clockwork, the spikes and dips of temperatures by sunlight and exposure, and the constant soaking and drying up of the environment. Not in deep forests, not in the deep oceans, not on grasslands, but only here, in the intertidal. Which means it also has a unique set of creatures, able to cope – in fact dependent – with this set of extreme fluctuations that easily kills others.

How many animals live on these shores?

Marine Life of Mumbai has been documenting data from Mumbai’s shores. Its project on iNaturalist clocks a whopping 1700 observations (and counting) including 322 species that have been verified by global experts. And that’s just in the last two years. Shweta Wagh’s report titled ‘Social Ecology of the Shallow Seas’ lists the different levels of the intertidal with the species that live and hunt there.

Is the intertidal zone protected?

Yes, but with stipulations. According to the CRZ notification, the intertidal zone comes under section CRZ 1B of the draft where certain “reclamation activities are allowed, including Foreshore facilities like ports, harbours, jetties, wharves, quays, slipway, bridges and sea links, etc.”

However, CRZ 1A protects unconditionally, certain animals in “ecologically sensitive areas and the geo-morphological features which play a role in the maintaining the integrity of the coast.” And on that list is coral, found on almost all our shores.

Wasn’t there environment research done before?

While environment Impact Assessment reports were carried out under the Municipal Corporation of Greater Mumbai, the NIO (National Institute of Oceanography) has been hired to study the impacts of the coastal road periodically for the next six years starting now. But in the absence of a strong baseline of what existed before work began, this seems like a shaky foundation to base findings on.

Don’t we need more roads, though? Isn’t this good for us?

Nikhil Anand, an Assistant Professor of Anthropology at the University of Pennsylvania. His research focuses on the political ecology of cities, read through the different lives of water. “Do we need more roads or fewer cars. The first section of the coastal road aims to serve only two lakh motorists a day, at a cost of over Rs 12,000cr,” he says. “Even if we accept this overestimated figure of ridership, and the underestimated figure of cost, the road does nothing to serve the needs of 98% of the city’s population, who will continue to use the existing rail and road systems.In the past, we have seen that despite more roads, traffic has only risen.

Mumbai is a great city, one that can afford and deserves a world class transportation infrastructure that comfortably, conveniently and fairly moves people at the lowest social and environmental cost. Stopping the road does not mean doing nothing. It means doing something else.” Goenka asks, “In view of the Metro projects, the number of cars was supposed to be reduced. Why do we need a new road?”

What can you do?

Arm yourself with this sort of information. Visit the shore because this isn’t just about fisher folk or the wildlife or our concerns about the traffic. This city is an ecosystem and what happens to one arm of it, will most definitely affect the other, and it would be nothing short of foolish to think otherwise. Take photos of what you see and upload it for documentation, so no one can ignore it. There’s not enough data on how the tide levels will be affected by this. Mumbai’s history with floods still haunts us. It is only fair that necessary checks are done to prevent any catastrophe, which includes the dying of an entire wild space. And honestly, that should be enough. Until then, if there’s any reclamation to be done, it should be you reclaiming your shores in solidarity with what lives there.