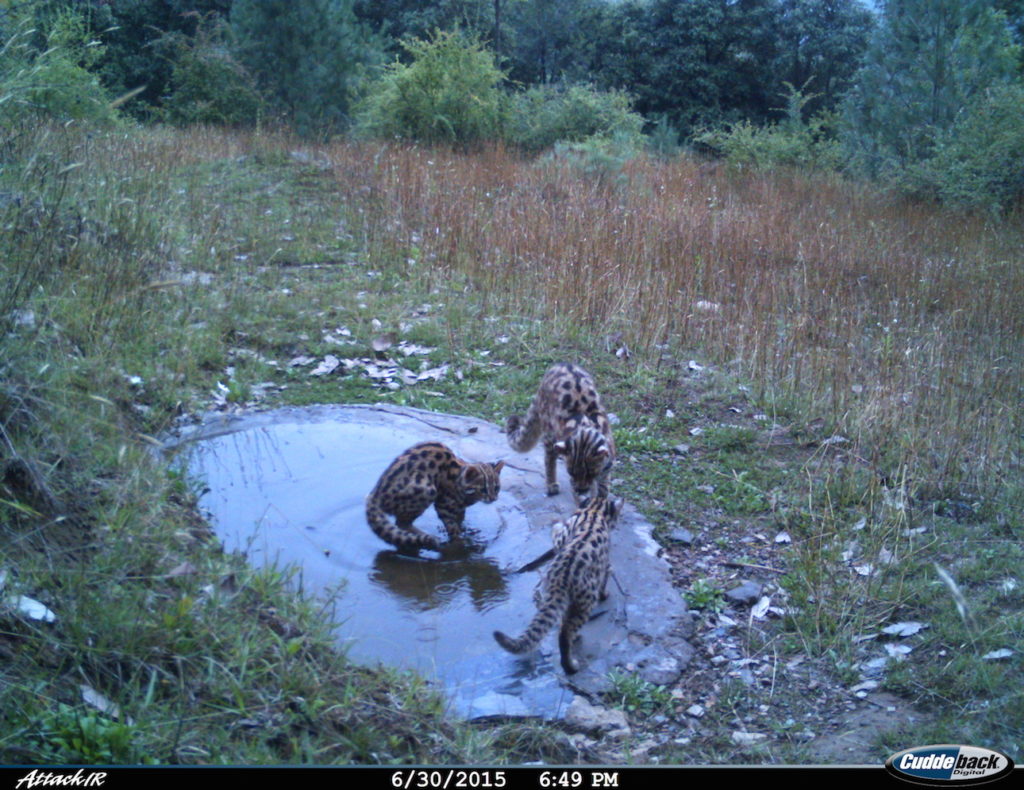 The trail is narrow, sloping downward into a valley on one side and rising up into the mountain on the other. At an elevation of 2,000m, the Jabarkhet Nature Reserve, a 110-acre forest in Landour, Uttarakhand, effortlessly muffles the noise from the township below. As I walk up the mud track, my two nieces and other family in tow, tall oaks and pine trees tower over us, deepening the silence. The temperature drops a few degrees.

Landour is a cantonment town contiguous with Mussoorie. With its old-new architecture, the school that teaches Urdu, Hindi and Sanskrit, and the main square (Char Dukan), it is interesting in a way poor tourist-ridden Mussoorie will never be again. Jabarkhet, a small, privately owned reserve, is just a few minutes from the Landour market. Even this reserve’s backstory has its share of drama. Earliest records date to the British Raj, when its main purpose, as with most forests of the time, was to provide wood for making charcoal. For much of the 20th century, ownership changed many, many hands before coming to rest, and finally thrive, in the able care of Sejal Worah and Vipul Jain. 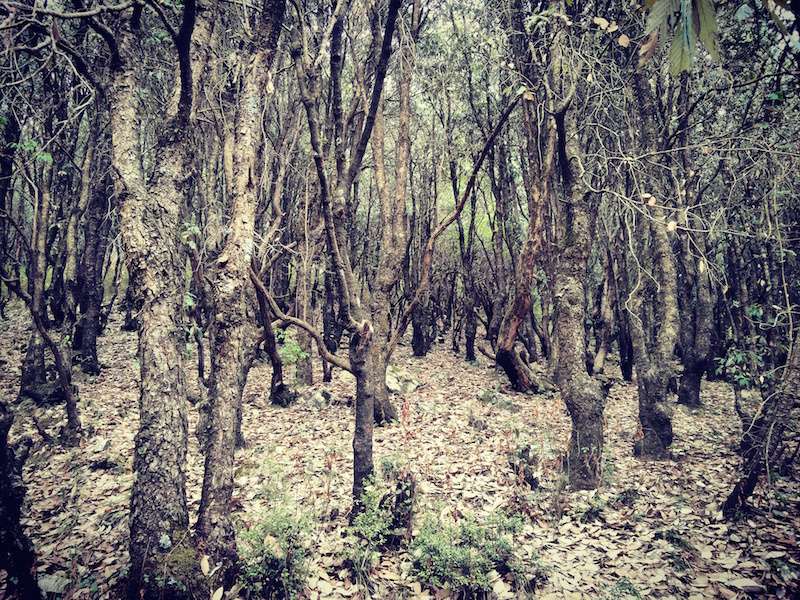 This walk through the mountain forest is part of my rehabilitation regime. For years, I have been the quintessential big cat tourist, taking great pride in my “100% track record” of sightings. Then, a couple of years ago, I returned devastated from a trip without seeing a tiger—something I took rather personally at the time. When asked what I saw, I replied I had seen nothing. There it was. What about the trees, birds, grass, bugs, snakes, what about the forest? When it came down to it, was a tiger sighting all I cared about?

Like any self-respecting addict, I had courted denial for a while. Did I subscribe to the breathless chasing, harassment of the stripes? Of course not. But by denying other species equal footing, by not taking an interest in habitat, (ho hum) micro fauna and (oh dear gods of boredom!) birds, was I contributing to the circus that is today’s tiger tourism? Hell, yeah.

It was time to kick the habit. And walking safaris were the best way to do it. I had never thought of forest walks as “safaris” before. To me, that word meant Jeeps, pugmarks, alarm calls, big cats and tuskers, not a small woodpecker tapping its beak against a bark.

I started actively visiting forests not known for their stripes or spots. With nowhere to drive to, and no cats to track, the forest took centre stage. The more species I could identify, the more enjoyable the walks became. Of course, my heart still belonged irrevocably to the striped cat, but now I knew how to zoom out and engage with the larger landscape behind it.

“Woods are not like other spaces,” Bill Bryson writes in A Walk In The Woods : Rediscovering America On The Appalachian Trail. “To begin with, they are cubic. Their trees surround you, loom over you, press in from all sides. Woods choke off views and leave you muddled and without bearings. They make you feel small and confused and vulnerable, like a small child lost in a crowd of strange legs. Stand in a desert or prairie and you know you are in a big space. Stand in the woods and you only sense it. They are vast, featureless nowhere. And they are alive.”

In Jabarkhet, I watch my nieces on the trail. Aarya, already an avid wildlifer at 9, walks earnestly, learning how to navigate tricky inclines, instinctively turning sideways while coming downhill, while three-year-old Meera, picked up and passed on, gamely takes on the undulating trail with two powerful tools in her arsenal, sheer stubbornness and her mum. 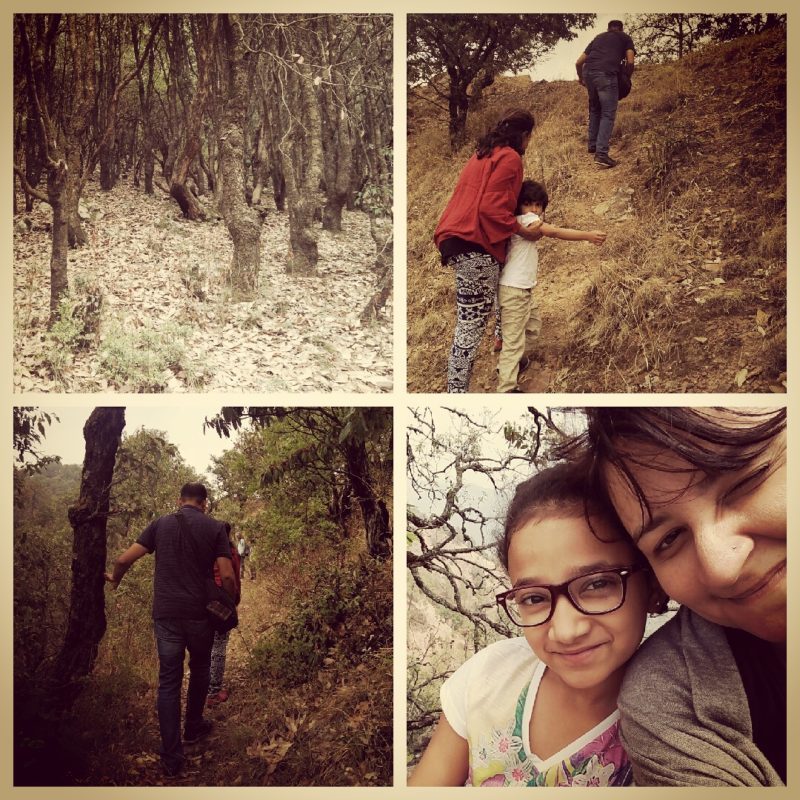 Both are growing up on a healthy diet of forests. When Aarya was 4, our role-play games involved a hungry wildebeest trying to cross the Mara river while a hungry crocodile lay in wait. Sometimes these games ended with fierce battles to a gory fake death; at others, the two became fast friends and enjoyed a chocolate treat by the banks. She became familiar with the concept of animals migrating for food at a very young age. Earlier this year, they visited two tiger reserves and came back with the sightings of a lifetime. Meera, having seen tigers on every drive, was perplexed by all the fuss about tigers. There seemed to be more tigers than she knew how to count.

This walk in a mountain forest, then, was pertinent. While it did what any other wild space does—took us away from our lives, our phones, got us to breathe air that we can actually use in our lungs—it also slowed us down in a way frantic Jeep safaris do not. Not just that, this movement, this physical act of taking one step after the other, concentrating on not tumbling down into the valley, forced us to stay in the moment and really look at the trail.

Bikram Grewal, ornithologist, author and fellow mountain addict, has had years of schooling near Shimla and owns two homes in the mountains. An avid birder, he noted how a majority of Indian travellers have never taken to walking in the hills, as compared to visiting lowland forests to see larger animals. “In America and a lot of European countries, walking through forests is a huge business,” he says. “The wildlife or park departments construct special walking (or cycling) routes, which are marked clearly so that trekkers don’t get lost. There are resting places and food kiosks and other conveniences. I can assure you that hearing the wind whistle through pine forests is thrilling, besides being decidedly cheaper.”

On the trail, we breathe in the heady scent of pine. Aarya and I listen to the tap-tap of the Rufous-bellied Woodpecker, giggle at the partridge as it waddles away from us, learn about the role oak roots play in preventing landslides, see the haze that hangs over the valley due to the terrible forest fires and coo over camera-trap images of a resident leopard and a Himalayan bear and her baby. She understands the importance of leaving things, even rocks, as undisturbed as she found them, just as she would at her own home. When a non-venomous snake crosses our path, she attempts to spot its retreating tail.

At a clearing near the top, we stop to rest. Aarya lies down on the forest floor, entwines her fingers behind her head and looks up at the sky, a picture of peace for a few seconds, her young mind without distraction. No infotainment, no iPod, nothing. She was present. Even little Meera had done us proud by completing the 2-hour trail despite being exhausted.

The top of the trail is called Flag Hill, owing to the prayer flags strung there that send traveller wishes out into the big unknown. I didn’t have to even think about mine: I looked at my nieces. May their boots always be muddy.