Tigers in the backyard 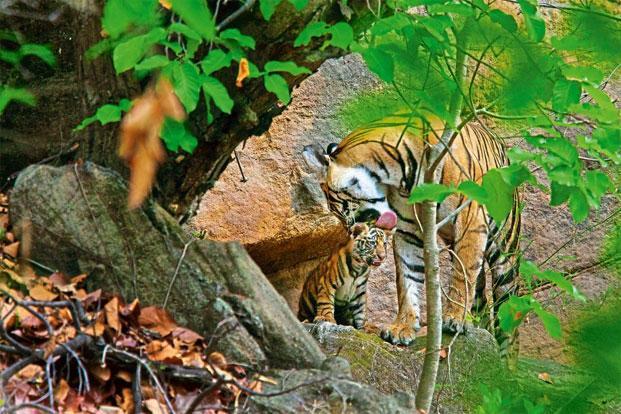 The alarm call broke the silence of the morning with the suddenness of a gunshot.

Anyone who has ever heard a langur’s alarm call in a forest will tell you why that sound will get your attention immediately. For one, it’s loud, and guttural, like someone with a terrible cough; and two, a langur calls only when it sees, and not just senses, a predator. It is then substantially more significant if you happen to hear it while navigating a fairly tight, open-to-the-sky Indian-style bathroom in the backyard at 4.30am, as I did. There I was, in a loo, somewhere in the Dhamokar range of the Bandhavgarh Tiger Reserve in Madhya Pradesh, and one door and a wall away was possibly a big cat.

The langur kept up its call for a full 20 minutes, during which I joined the rest of our group and listened in the pitch darkness, wondering, craving, now to see what was walking silently beyond those walls. It was possible, Chandrabhan, the forest guard, said, the tiger that had made a kill in this area and had been sighted repeatedly in the past week, had made a house call.

Bandhavgarh is among the country’s more popular tiger reserves and therefore, a tourist magnet. But as thrilling as close encounters with these magnificent creatures are, they were incidental to my trip.

I was in Bandhavgarh to volunteer with the Last Wilderness Foundation (LWF). For four years now, they have been running a Village Kids’ Awareness Programme and this was their 10th trip to the reserve. The concept developed by the team—Vidya Venkatesh and Bhavna Menon—is straightforward: Conservation of forests—and the tiger—cannot happen without the support and empowerment of the people who live around them. Three times a year, the LWF visits Bandhavgarh and educates children in villages that lie in the buffer zone about biodiversity, sharing resources with wild animals, and working closely with the forest department. The foundation has already covered 55 of the 96 villages in the buffer zone. On this trip (14-19 February), we focused on Badwar, Chirwah, Ghaghdar, Dhaurkoh and Pathrehi.

When I first heard of the project, I was intrigued. How can you teach children who live in and around the forest about the forest? What could a safari possibly show them that they hadn’t seen a thousand times? The answer to that was revelatory. Hardly anyone on these safaris had seen a nilgai. Almost none of the children knew how dense the home of the wild really is. And out of the 389 children that we took to the park over five days, probably five had seen a tiger before. To the others, it was an unknown, unseen, ferocious entity that preyed on people and cattle. It was something they feared, even disliked, because they had only seen their families react that way.

Over the next few days, we would wake up at 4.30am, collect the children from a predesigned list made by LWF’s local coordinator Pushpendra Dwivedi, fill up two canters with around 20 children each, speak to them about the forest during the safaris, return for lunch, show the children a presentation—and then, repeat, picking up children for the second lot. And repeat.

What did this programme do? I thought about it every night when we wound down. I think it did something magical. It showed the children the wonder in something they took to be banal—this was just home, after all. With the call of the peacocks, the big liquid eyes of deer, the mischief of the langurs, and the cool air enveloping the open canters, the forest became a place of leisure, not just a source of mahua flowers and liquor, vegetables, and wood. It was a bit like showing guests the cities we live in and looking at things we haven’t seen in years, or ever.

The children made a day of it—some wore their Sunday best and sat ready for us at 5am; others ran in various stages of being dressed towards the canters, so as to not miss the ride. They saw the patrolling camps deep in the jungles, understanding what the forest department does. They saw the forest, their forest, crawling with Indians and foreigners, searching for the elusive stripes, having spent all this money just to come to where they lived. They saw how this forest and its tigers had put their home on the tourism map.

But nothing felt as sweet as watching the children sight the tiger for the very first time. Every time we saw one, they were thunderstruck. When it stepped out on to the mud track, its fur the colour of the evening sun, there was an audible gasp from the canters, delighted smiles on some faces and awed, round eyes on others. The closest sighting was of a large male, less than 10ft from the canters. An 11-year-old climbed into my lap to see better, and I could hear her whispering over and over how big and beautiful it looked.

The most important takeaway was that the tiger ran away from them, not towards them. We always ended the drive with that thought, that the tiger was not only uninterested in attacking humans, it was positively terrified of them. And that if the tiger dies, we will kill the forests with it, and with that the source of the villages’ food and water. 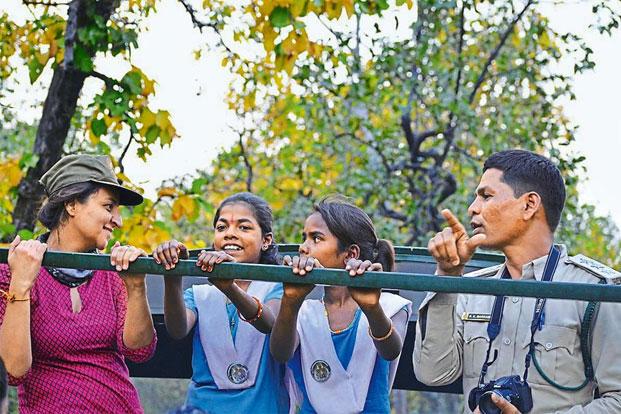 “In the city, we have such romantic notions about the tiger. These people live with it in their backyard,” says Menon, highlighting the fact that there are real problems that need to be tackled when it comes to man-animal coexistence. “Tigers are attacking cattle, villagers are entering the forest and herbivores are eating through crops. And in the fight to protect their interests, there have been fatalities on both sides.”

When the LWF first started this initiative in Bandhavgarh, they had to deal with angry villagers who didn’t want to send their children to learn about an animal they saw as a threat. Attitudes are changing slowly. The day I arrived in Badwar, a man had died in an encounter with a tiger. A year ago, an angry mob had burnt down a forest chowki after a similar incident. This time, the situation didn’t get out of hand, but the day was tense and the forest department representatives, on alert. In this milieu, Ram Milan Yadav, who had lost his father to the attack that day, came to our morning session and enrolled his son for the safari. “Take my son too,” he said, “and teach him about the forest and the tiger.” If this is not a testament to this man’s resilient, pragmatic understanding of the wild and the work that the LWF is doing, I don’t know what is.

We stayed at forest chowkis with the guards, who threw open their homes, kitchens and limited resources to us but also shared their knowledge and experiences with us every evening. From the on-ground staff to the drivers of the canters, Ravi and Dayaram, with their I-am-going-to-show-the-children-a-tiger-if-it-kills-me attitude, to the villagers who came along as chaperones, to the forest department that ensured all support, everyone seemed to see the benefit of this experience and was committed to doing their bit.

When you travel as a volunteer, the information that’s coming at you is in bulk, compressed in a crash-course of culture, language, conflict and solutions. It’s like learning the steps to a choreographed sequence in real time. While connecting and laughing with the children came easily enough, I discovered my discomfort with speaking Hindi after years of thinking and writing in English. It was embarrassing—and it’s something I plan to remedy.

But that’s the wonderful thing. You volunteer so you can help, and in that lies the less significant but inevitable by-product of self-revelation. Because if I engaged with a cause, and no matter how much I lent myself to it, if it did nothing for me, if it did not make me more aware, question more things, if it did not linger long enough after I returned to change me, then what good was I, really?

If you would like to volunteer for the Last Wilderness Foundation, visit www.thelastwilderness.org