Stars on our Shores

A version of this article appeared in The Hindu 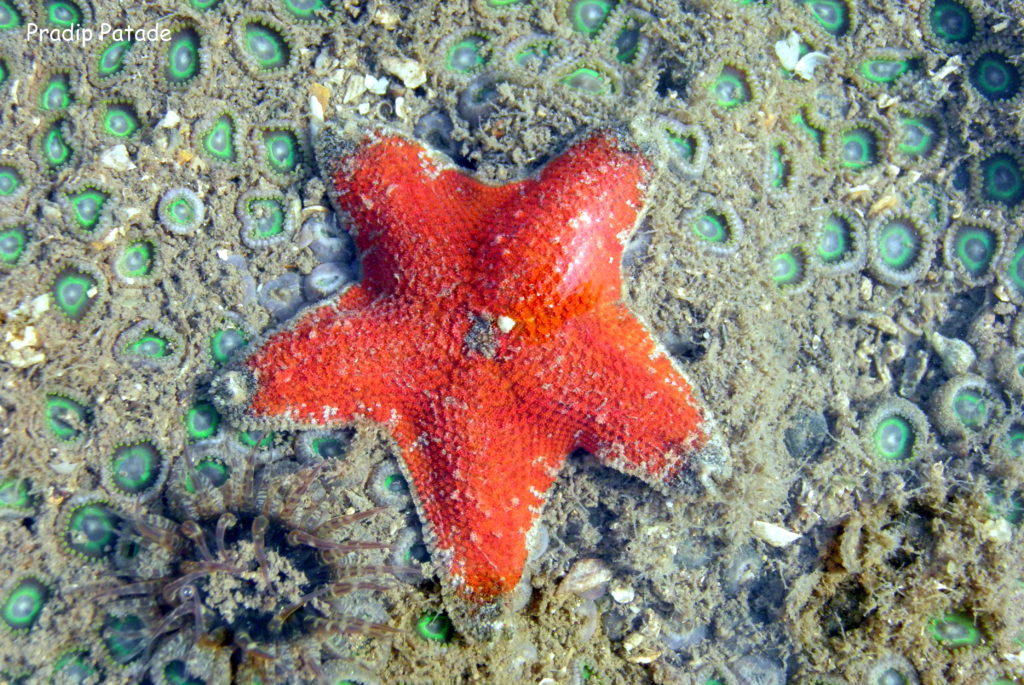 It must be the shape.

As children, we’ve drawn stars in our books, given them prime real estate on Christmas trees, smiled back at them in children’s cartoons and sang poems about their twinkling presence in night skies. Our minds are conditioned to think of these shapes in a cosmos filled with mysterious, celestial beings.

And so, when I saw a Sea star (or a starfish), for the first time — a small 5cm, 5-armed, radially symmetrical silvery grey animal clamped on a rock — it looked like it had fallen right out of a crowded sky. Delight rippled across our small group, much like the tide that had revealed this little beauty. The most charming part of this encounter was that we weren’t on a dive or a faraway island with a coral reef; we were at Juhu, one of Mumbai’s most popular (and congested) beaches. While the group of marine biologists with me moved on to see nudibranchs and sea snails, the sea star and I waited together until the tide rolled in against a setting sun. 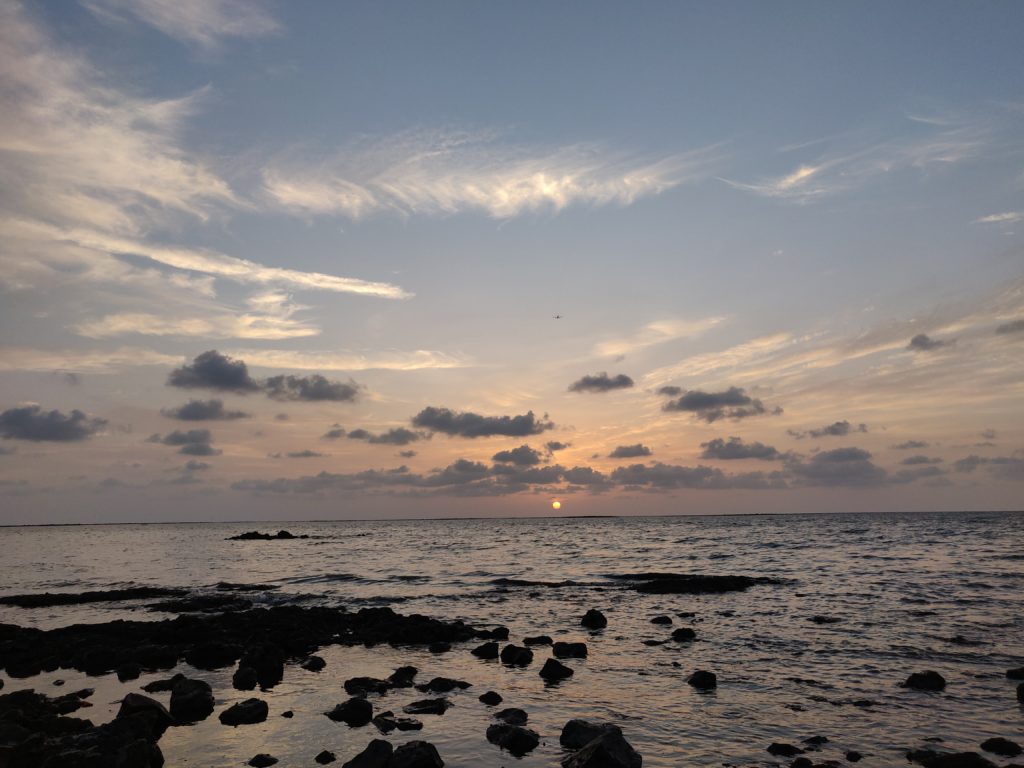 Its apparent beauty and legacy of being adorable is just the gateway to the enormously cool world of the starfish. For starters, look at the sheer diversity of these animals: there are around 1800–1900 (recorded) species belonging to 36 families. Now look at the range: they’ve been documented from the intertidal region to coral reefs to depths of more than 6,000m, (although their densities are highest in shallow regions in the continental shelf). And now their adaptability: their bodies and sizes change according to their homes — small and camouflaged on rocks and sandy beaches or electric blue and pink in the coral reefs (the bright colours driving predators away).

I am delighted to report I see the small fellows from the Asterinidae family on most walks, not to mention its willowy, elusive cousins, the Brittle stars, which have a small central disc and long, snaking arms that seem to go one forever. It’ll usually be a point and shoot meeting; like their Bollywood counterparts in the city, these stars have perfected the art of avoiding the paparazzi, and you’ll usually see a tantalising glimpse of a long, gliding arm disappear under a rock before you’re ready with your macro lens.

Just looking at, let alone photographing, these little pools of water at low tide needs some practice. While our shores and beaches aren’t unfamiliar, tide pools are. In that it is animals like these, with shapes we know and love, that help introduce us to the miniature world of tide pool creatures. These stars reached out with their many arms and captured my imagination at first sight, urging me to come closer and slowly explore the intertidal landscape from ground level. 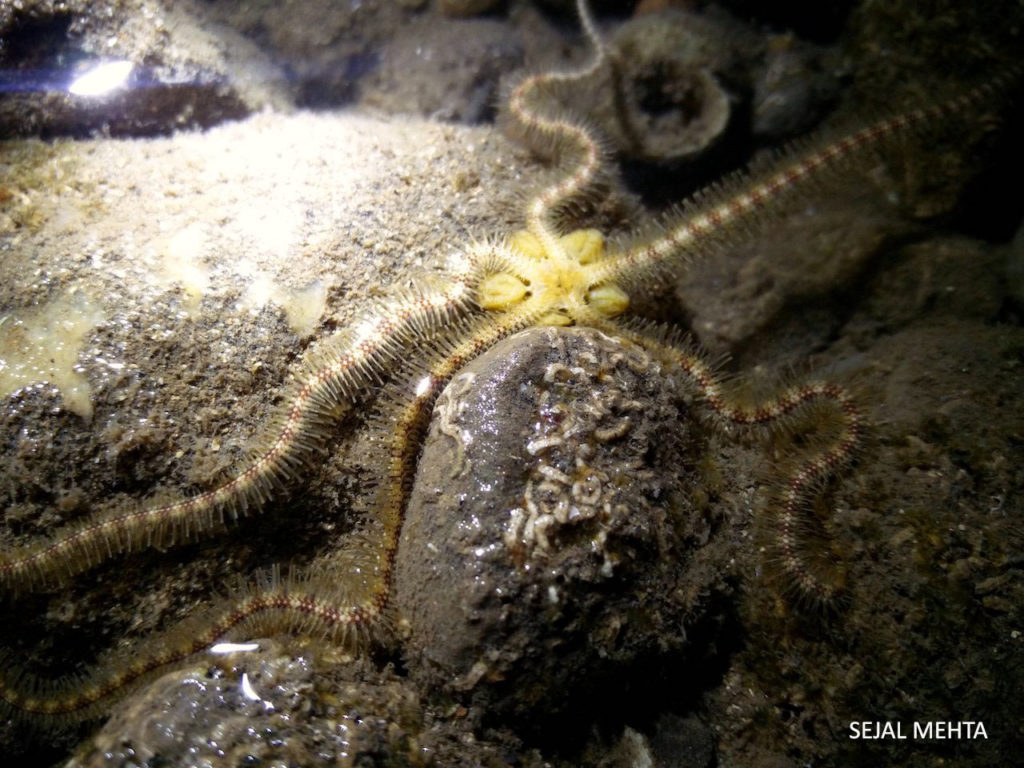 Part of a formidable Phylum called Echinodermata, the Sea star is in august company. Brittle stars, Feather Stars, Sea Cucumbers, Sea Urchins — these are some of its cool cousins; if you see them on the shore, their bodies will tell you where they get their group name (echino = spiny; derma = skin). While they share some characteristics — each animal has its own set of superpowers. Well, they have been around before dinosaurs roamed the earth so a heady set of magic tricks is to be expected.

For example, it is a known fact that some marine creatures can regenerate lost limbs. But sea stars can grow another (entirely separate) animal from a chopped limb as long as a part of its central disc is still on the arm. The late B.F. Chhapgar’s book describes its relationship with fisher folk in this ironically hilarious way: “As sea stars are fond of eating oysters, they are the bane of oyster fishermen. Earlier, whenever the fishermen caught sea stars in their nets, they would cut them up into two, thinking that they had killed them. Little did they know they were actually helping to increase the sea star population by doing so.”

Just as well. Sea stars are a keystone species in a few intertidal areas — playing the role of prey and predator — keeping the population of mussels, clams, oysters and other smaller invertebrates in check. “Their presence is therefore a positive indication of the health of an ecosystem,” says marine biologist Zoya Tyabji, with the Andaman Nicobar Environment Team. There is however a species commonly called the crown-of-thorns sea star that preys on live coral and can cause an imbalance in the reef ecosystem if its population gets out of hand.

For such a ubiquitous creature, the starfish is surprisingly data deficient. Research scholar Hitisha Barolia, with the Department of Biosciences, Saurashtra University, has been working on intertidal echinoderms in Saurashtra, Gujarat, and says this could possibly be because their intertidal habitats make them inaccessible.

“There is little scientific study on this group of animals from this region and no baseline database of this group from the Indian coastline, which is vital for further research. A few studies have been done on the echinoderms from Andaman and Nicobar Islands, Lakshadweep, Gulf of Mannar, and a few other regions, but detailed taxonomic studies and the status of its current ecology are lacking,” she says.

Upon closer inspection, the shores of Mumbai are undeniably alive. Most photographs of this city’s ocean have sewage, oil spills, and the occasional floating Ganpati idol in them. So, to be able to photograph starfish, fiddler crabs, moray eels and corals here feels pretty spectacular. Sea sponges (another inspiration for a children’s cartoon, the lovable Spongebob) form gardens on the coast off Marine Lines, while (Schedule 1) corals survive in smatterings on shores across the city. And it’s nothing short of miraculous that sea stars live (and possibly thrive) on landscapes like Mumbai and other populated coastal cities in the face of habitat loss and wildlife trade that puts them on the market for aquariums and ornamentation.

So the next time you’re at the beach, look closer at the tide pools and discover an unexpected, astonishing world. Keep your distance, though, sea stars usually take large quantities of sea water to sustain until the tide comes back in. If they’re picked up, or distressed, they are known to expel water, which can be potentially dangerous to the animal. So if you’d like a closer look, get down on your hands and knees (scraped from slippery rocks and sharp barnacles) and peer at it from a respectful distance like the rest of us.