Shore in the City 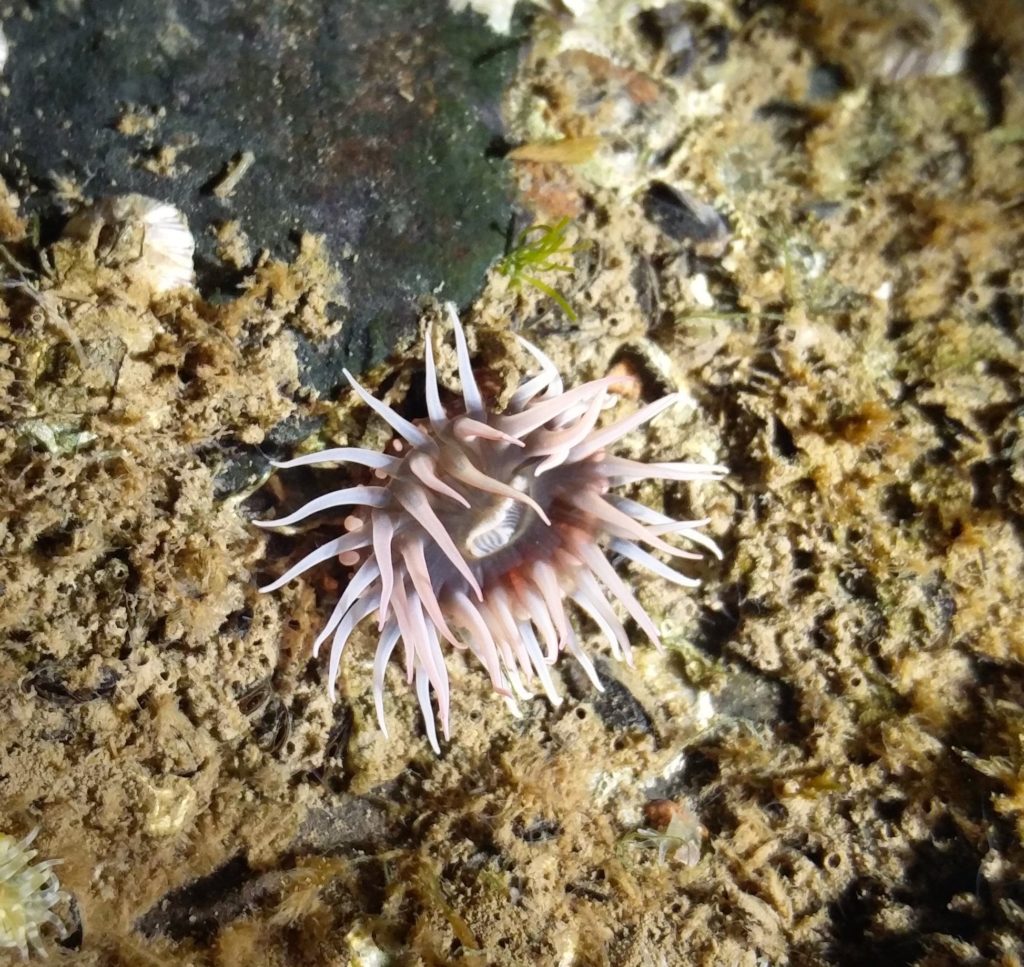 This article first appeared in the Indian Express.

IT WASN’T rush hour at Marine Drive. The promenade, with its Queen’s necklace, has featured in history, books, movies, and scores of personal stories. It’s where the city gathers to feel the pulse of the metropolis.

This morning, however, Marine Drive was still. Its rarely silent roads were empty and the streetlights cast a soft yellow glow on the promenade. It was basking in some quiet time, preparing itself for the daily avalanche that is Mumbai.

We walked down the steps leading to the sandy shore, along the tetrapods that line the coast. After a small hike, it was as if a portal had opened up to a parallel dimension. From where we stood, the city stretched out in the distance, slowly waking up to the morning. But, under our feet, was a landscape that housed otherworldly life forms — a garden of the most brilliant-coloured sea sponges, cowries hiding in crevices and rocks covered with tightly-packed colonies of zoanthids for as far as the eye could see. With the ocean gently rippling all around us, this could easily be the set of a television show about alien life. Any time now, someone would yell, “and… scene”.

Mumbai was formed when seven islands joined to create the present-day megacity. This defines the city’s coastline. The four stone blocks into the sea off Marine Drive, reveal the disruption/upheaval of the backbay reclamation scheme in 1919 only at the lowest of low tides. The water was retreating now, pulling its veil from the barnacled rocks, revealing a civilisation hard at work and play. We had a little over an hour to meet and greet its inhabitants, before the watery cover washed over the area.

Shores are in-between spaces. On the one hand is the extreme life of the deep sea, and, on the other, human settlement. In the middle is this space that is visible only at low tide: the intertidal zone. While this interplay of the submergence and emergence of land is a shared one, humans don’t have dibs. We venture in only when the water recedes, and the turning of the tide signals that we have overstayed our welcome, provoking an insatiable curiosity about its functioning. A bit like poet Rumi’s proverbial field between right and wrong, but without all the emotional turbulence.

The collective Marine Life of Mumbai, formed in February 2017, by Siddharth Chakravarty, Pradip Patade and Abhishek Jamalabad, takes the city-dwellers on shore walks to meet the underwater inhabitants. In its second year, the team has expanded to 13 sea-obsessed, enthusiastic volunteers, some of whom have never been remotely involved in anything related to the ocean until now. Over a shared understanding of the welfare of the oceans, they have come together to sow the seeds for a budding citizen-science initiative and an outreach strategy that brings people closer to the oceans.

Every month, a public walk — one that is organised at the mercy of the tide — takes one to different shores of the city – including rocky (Haji Ali), sandy (Juhu, Girgaon), muddy (Sewri) – led by marine biologists who introduce humans to the other denizens. For a city that has Sanjay Gandhi National Park as the go-to for urban nature excursions, shore walks are a fascinating addition to their itineraries.

Everything about a waterfront is pleasing — be it a river in the mountains, a lake in a town, or a shore in a city — even one as strewn with garbage as Mumbai’s. Whether you’re travelling to the city, or live here, watching the sunset colour the sky over the horizon will be the high point of your day.

Mumbai is a coastal city. But as we outgrow building sand castles on the beach, most of us have reduced our relationship with the sea to the sporadic romantic stroll or a fleeting exercise regime. Somewhere, we have lost our connection with an integral part of this city’s heritage, one that we have understandably – in the chaos of this metropolis life – begun to take for granted. The closest relationship that the city has to its waters is through its fishers, who navig ate the black and white (and grey) areas of these waters every single day. In that, the more we walk these shores, the more we’ll be able to comprehend what’s coming to our plates and what it costs – in every possible way – to the people that bring it to you.

Every shore is different from the others, so is its marine life. The intertidal zone, forming the edge of the retreating tide, forms a gateway, an invitation to the secrets of the deep far into the horizon. If just off Marine Drive lies a treasure so different from the others, imagine what lies beneath. But for now, let’s stick to the shore. Home to diverse creatures. From the smallest of snails to the largest of octopi. Like the anemone, for example. The home Nemo stayed at in the movie is actually an animal, not a plant, one that – in an enviable show of self-reliance – splits into two when it wishes to reproduce. Or, the Brittle stars and starfish, which have the power to regrow lost limbs, or lose them voluntarily to escape predators. But the most relatable creature might be the Hermit crabs. They face a housing crunch in Mumbai like all of us. Underneath this shell that they carry around – like a home – they’re squishy and vulnerable, unlike other crabs. They use shells discarded by other creatures (like snails) and, when they outgrow those, they find larger ones, and in some cases, make do even with trash we’ve left behind. This way of life earns them their name. 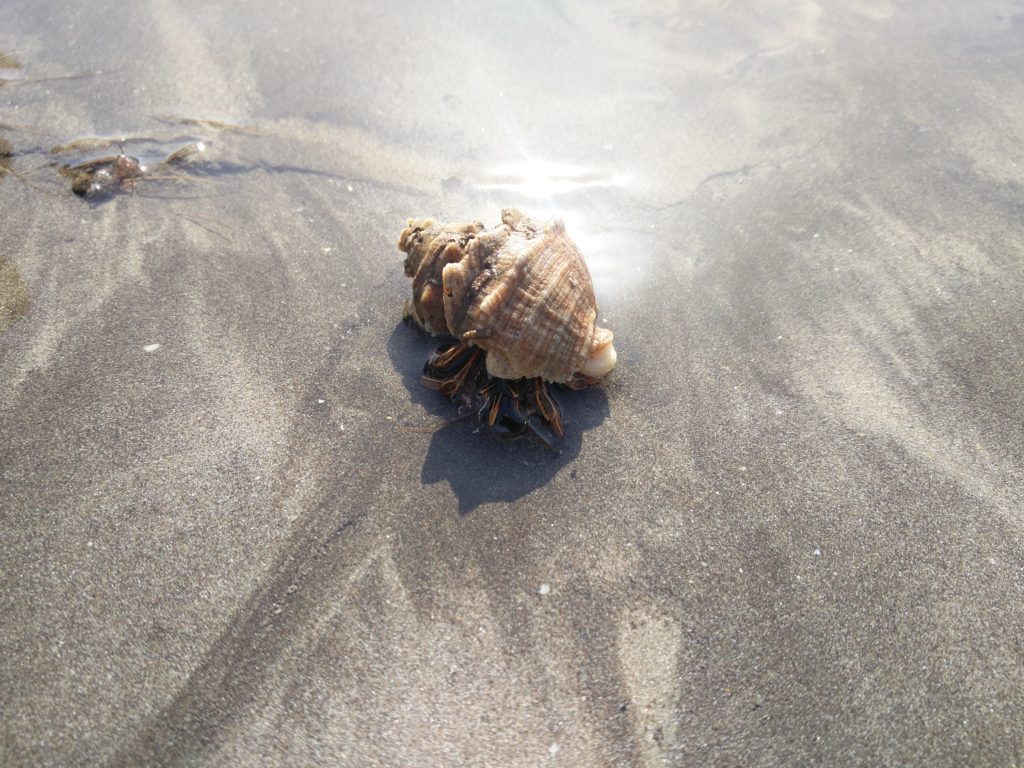 Some animals use hard shells for protection, move from place to place, manage a good meal, meet other creatures, make babies. All this while being surrounded by and drowning in our filth but very much alive, living each day as best they can.

Not too different from us, no? We need to stick together, all of us. Mumbai is the same to everyone.