‘Waterproof fish’: Look beyond the venom of these monsoon visitors to Indian beaches

This piece appeared in Scroll. 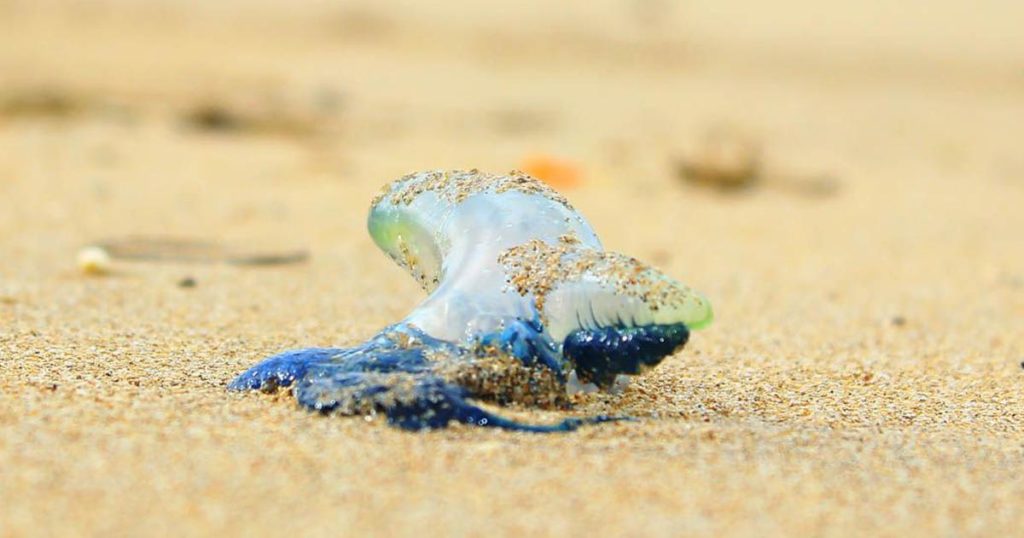 Iridescent, shimmering, tentacled. When you see it on the beach, it looks harmless, even inviting. But beach regulars know better than to trifle with the Portuguese Man O’War, commonly known as the blue bottle.

On a marine shore walk, I kneeled down to document a specimen that had washed up at Mumbai’s Juhu Beach. Immediately, one of the beach photographers – part of the team that roams the beach to take and print sunset photos of tourists – came rushing over. “Haath mat lagana, zor se shock lagega,” he said. “Don’t touch it. It delivers a nasty shock. Most people don’t know any better.”

When asked what name he knew it by, he said: “Waterproof fish. It stays alive even outside the water. Zabardast hain. It is amazing.” 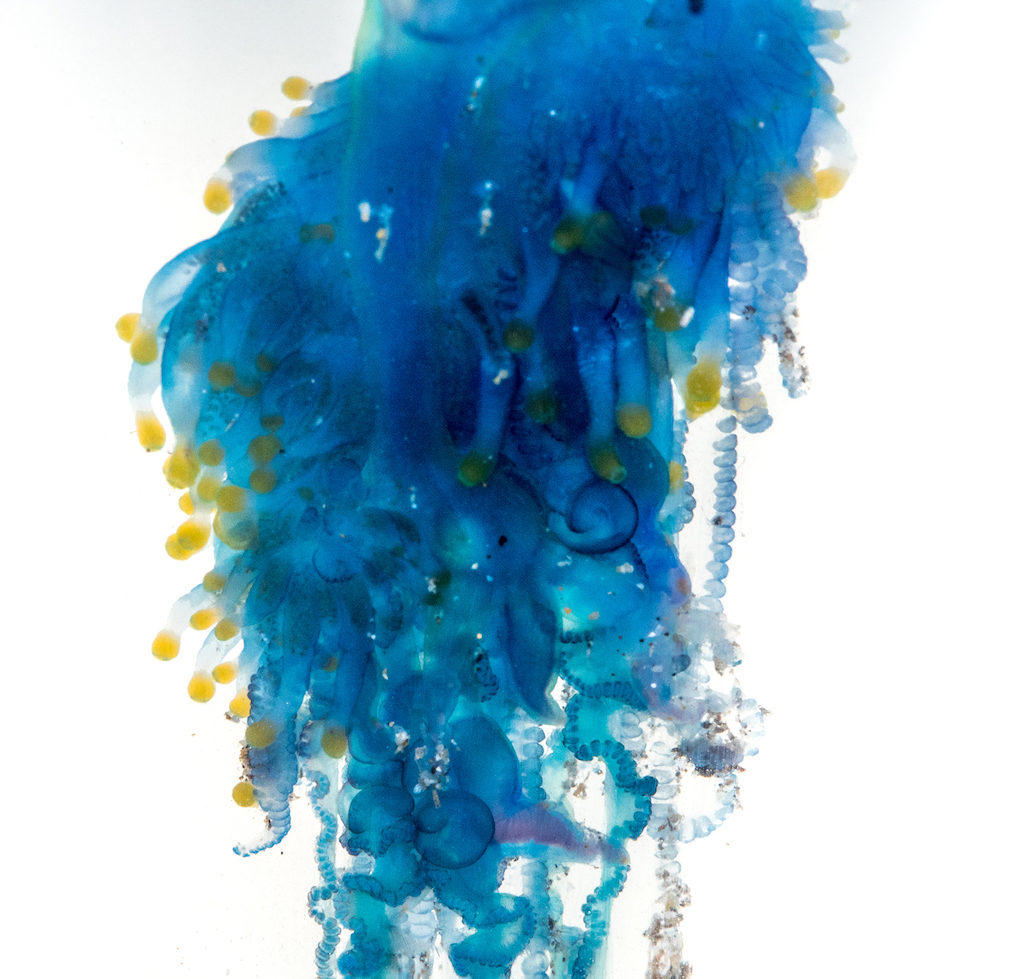 What the tentacles of the Portuguese Man O'War look like in a macro photograph. Photo credit: Shaunak Modi[/caption]

Every monsoon, a strong southwest wind creates surface currents on the Indian ocean and a variety of marine life rides them to the shores. Around the beginning of June, small white discs with blue-green tentacles, the size of Rs 10 coins, wash up on the beaches. These are Porpita Porpita – a name so nice, you got to say it twice. 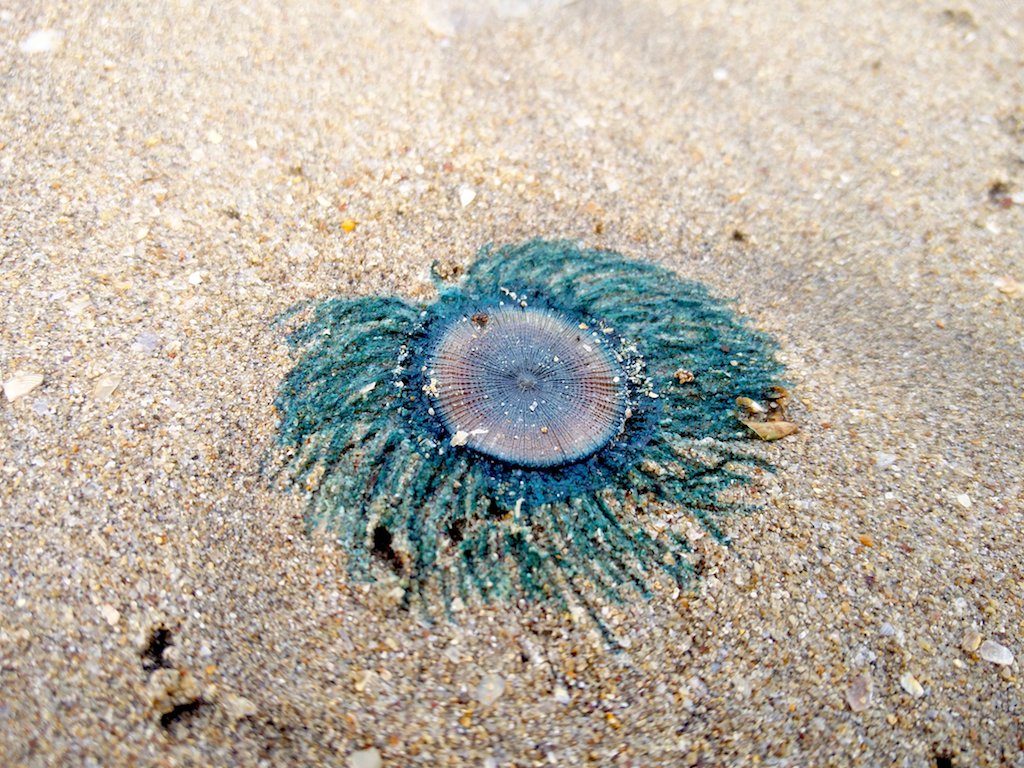 A blue button lying on a beach in Mumbai. Photo credit: Sejal Mehta[/caption]

Commonly known as the blue button, they are siphonophores – marine animals belonging to the phylum Cnidaria, which includes corals, jellyfish, hydroids. They lie strewn on Indian beaches like tiny blue and white suns, warning fishers that the sea will soon be too choppy to head out.

Close on their heels comes the Portuguese Man O’ War, which is not a jellyfish, as commonly believed, but a siphonophore with the scientific name Physalia.

A view from a beach in Goa. Photo credit: Sejal Mehta[/caption]

Life out in the deep seas seems otherworldly, filled with wandering creatures with superpowers that are hard to fathom – bioluminescence, advanced sonic capabilities, camouflage, shape-shifting. In that, the Man O’ War is a warlord of substantial proportions. It earns its name from its crest – a gas-filled chamber, which looks like a warship floating on the high seas. It uses this transparent bubble, which is anywhere between 4cm-13cm long, filled with part carbon monoxide and part atmospheric gases like oxygen, nitrogen and argon, as a sail to navigate its path on the ocean’s surface.

See a video of these creatures moving on the water to the soundtrack of the GoT Winds of Winter and you will see the name fits like a glove. Each specimen is actually an army in itself – not a single animal, but a colony of organisms that are incapable of surviving individually and coming together to form a superorganism.

Below the crest, a cluster of small blue, green, purple protrusions form its digestive organs, while the long tentacles play the feelers and tasters, and the tiny pinkish organisms form the sex organs.

Found in Indian, Pacific and Atlantic oceans, the Man O’War exist in warm, tropical and subtropical waters, and are always on the move.

On the beach, it is easy to avoid getting stung by not touching them. But in water, their tentacles swirl and spread out, growing up to 12 metres long – 30 metres in the specimens found in the Atlantic Ocean – making it difficult to dodge a sting if you happen upon more than one.

The tentacles are covered in beads of cells, which can pack a walloping sting, with a force that is 20 to 50 times their size and can inject venom through clothing and even surgical gloves. The venom, which is a neurotoxin similar to that of snakes, continues to fire on contact even after the animal dies. A sting can cause swelling, nausea, extreme pain. In fact, octopuses have been documented using the tentacles of dead Man O’ Wars to ward off predators.

The late BF Chhapgar, an author and one of India’s first marine biologists, describes the Man O’War sting “like being struck with a red-hot whip, which also carries an electric current. Its venon is as potent as a cobra’s; it requires just 0.037ml of venom per kilogram weight of a human to kill. We should thank our stars that it cannot inject as much venom as a snake, just enough to kill fish, otherwise no one would dare to swim in the season when the animals abound.”

This year, reports of Mumbai residents getting stung by the Portuguese Man O’War have dominated the conversation about them. While the numbers seem larger this year, this is not a novel phenomenon, neither is it cause for alarm. These stunning animals come to our shores every single year. Unfortunately, our welcome has become increasingly more plastic over time, especially in Mumbai. But they still come, like clockwork, washing up on piles of our filth, on the trash that marks our tide lines, waiting for the water to take them back into the depths.

While there is no clear research on how long they can live outside the water, if they are not swept back in the next tide, they dry out and perish on the sand.

Waterproof fish. But only just.

If you come upon them, make sure you keep your distance, are not barefoot, and avoid swimming in the water. But there is absolutely no harm in admiring them from afar, and hoping that our filth does not stop their passage back into the water.

The author is a member of the Marine Life of Mumbai, an open, citizen-driven initiative to explore and understand the coastal biodiversity of the Mumbai Metropolitan Region. 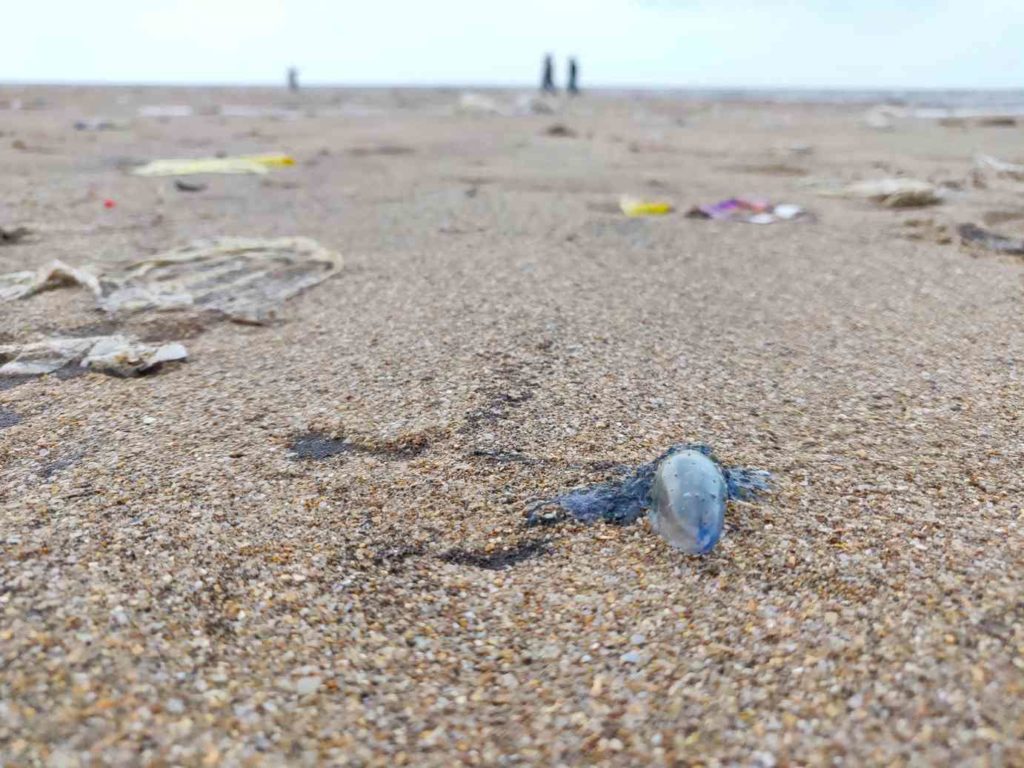