Huang Yung-fu wanted to save his home, so he made it a canvas for his rebellion. The result? Rainbow Village 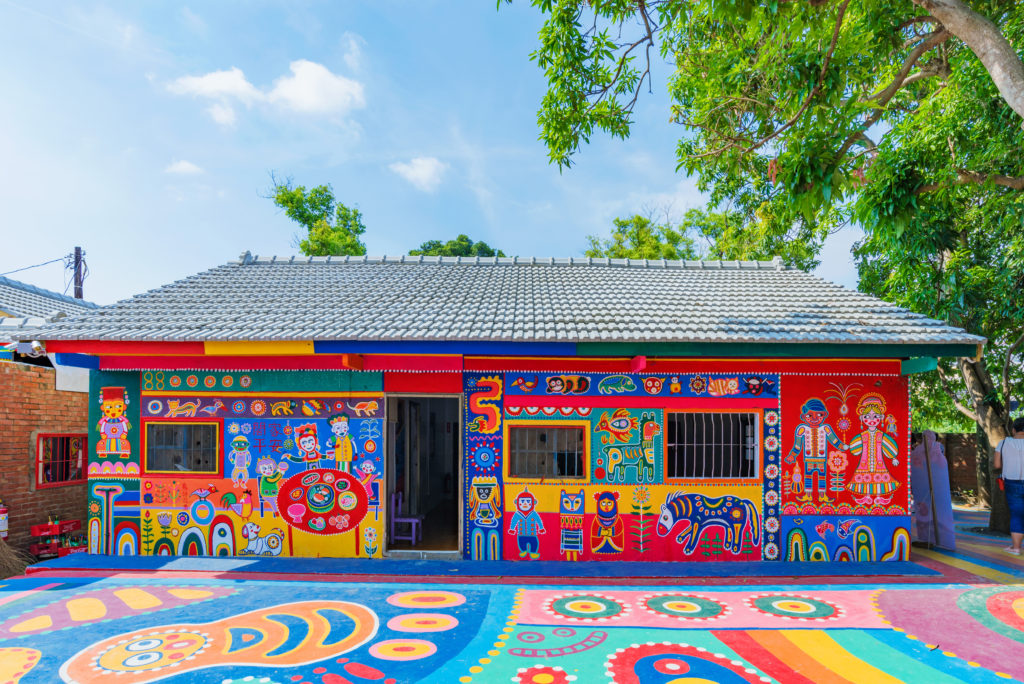 The walls of the Rainbow Village in Taichung, Taiwan, are kaleidoscopes of colours that have never experienced a shy day in their lives. Bold, bright reds, yellows, oranges overlap and disperse, forming motifs of cats, lions, birds, faces, scripts to pull tourists to this little space in the city.

If it’s on tourist itineraries today, it’s because attention was exactly what it was after. The art is part of a success story that prevented the community homes from being razed down for development. Huang Yung-fu–the creator of Rainbow Village–is a former Kuomintang soldier who fought in the Second Sino-Japanese war and China’s civil war. After Chiang Kai-shek’s Nationalist army lost the civil war in 1949, around two million Chinese fled to Taiwan, where soldiers were given temporary housing, which turned to settlements for war veterans. Huang Yung-fu, who is originally from the Guangdong province in China, was moved to one of these in the Nantong district of Taichung.

In the ‘90s, the government started to demolish these structures to make way for larger development projects; where there were 800 colonies, only around 30 remained. Huang Yung-fu decided he didn’t want to give his home up. Armed with a paintbrush and colours, he began to paint the walls of his home, and gradually other homes in the settlement to discourage the idea of demolition. As news of the way he was spending his time spread, students, citizens showed up as volunteers and the project grew. More people started to travel to watch ‘Rainbow Grandpa’ as he is now called, and Rainbow Village became a tourist destination recognised by the government with more than a million visitors every year.

Rainbow Village’s art is almost surreal, in that it has many voices, but it stays true to the original, which some say came from Huang memories–pets, people he knew and events that had come to pass. Tigers leap across walls, grinning cats dominate some corners, and pandas and peacocks make appearances in the abstract. The entry is free but you’re encouraged to take a look at the souvenirs shop.

Ninety-six-year-old Huang still lives in this home, and if you’re lucky you’ll meet him. But even if he isn’t, you can still experience his journey through of his legacy in the form of photographs, news pieces about him, his overalls and paint cans in a corner.

Some say Huang’s rebellion is incidental, a consequence of a bored mind with a paintbrush, while others saw his dedication to his settlement. The result stays the same, a fantastical canvas of creatures, people, writing all encompassed in a Taiwanese settlement that was otherwise without colour or character (don’t expect an actual village, though, it’s more of a park that you can walk through quite quickly. Keep an eye out for the ever-present Iron Man (or woman), who never takes off the mask, regardless of the weather. Sometimes, this figure plays the guitar, sometimes takes enthusiastic selfies; when I visited, it sat motionless against a wall for more than an hour in the heat, allowing for photos. The mask never came off.

Art illustrates not just what is, but what could be, and in the most powerful way, what we could lose. Art also empowers a larger community contribution, in the form of a united front, not restricting itself anymore to a single individual. Rainbow Village does just that.