Sony Xperia: The Glowing Forests of the Western Ghats

For National Geographic Traveller India: Sony launched a new camera phone that was water-proof, dust-proof and could film underwater. They asked us for an idea, and we divided this into 3 months. I took the phone with me to Goa in the monsoon, and did a waterfall trail, and clicked photos while the phone got merrily wet. Second we sent it to Rajasthan to shoot the sand dunes (dust-proof) and third, we sent it to a surf club in the south, where it shot underwater. It was immensely successful, this campaign. Sharing the three Goan pieces here.

Story 1: The Glowing Forests of the Western Ghats 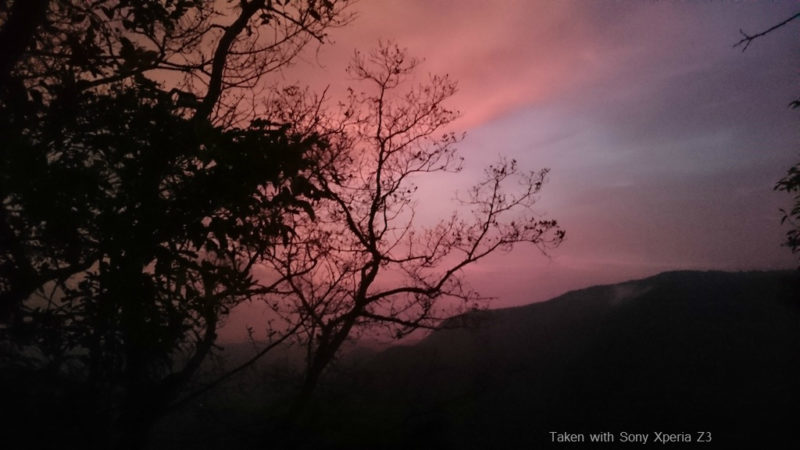 The snake is inches away from my foot. As I shine the torch on her green, brown body, the gorgeous, and fairly venomous female Malabar Pit Viper, pauses on her commute across the dirt track, unexpectedly obstructed by my shoes. There’s a hush over the group as both parties contemplate their next move. The rain falls softly around us in the dark night as the pit viper stays absolutely still, alert, wary, head raised, the colours of her skin glowing in the torchlight. Keeping both eyes trained on her, I slowly step forward, unblocking her route. After a moment, she relaxes, drops to the ground and starts to amble across to the other side for a good night of foraging.

I watch her leave, feeling more alive than I’ve felt in a while. This is not a sighting that happens every day and it only reiterates my belief that animals aren’t out every night baying for our blood. They’re even less interested in a needless confrontation with us than we are with them. Of course, it would help if I were to pay more attention on the path.

Snakes, though a delightful bonus, aren’t the reason I am out in the forest after midnight. I am on a trail through the Western Ghats, combining my waterfall trail with a review for the new Sony Xperia Z3, which promises to be waterproof. And what better way to test it than to unleash the full fury of the southwest monsoon on it. The rain is clearly in no hurry to leave the Mhadei Wildlife Sanctuary. It’s evident in the way it is stopping to colour the gorgeous Bracket Fungi, chat with the Malabar Gliding Frogs, thunder alongside the call of the Slender Loris and most importantly, light up the trees with luminescence.

“Switch off your torches.”

We look at Nirmal Kulkarni, naturalist and herpetologist, wondering if he remembers that we’ve seen a snake not more than half hour ago, and reluctantly switch off our torches. The night closes in around us, immediately magnifying the sounds of the forest; crickets, frogs, distant thunder, and the urgent pitter-patter of rain. After a few seconds, one by one, the trees begin to glow. As our eyes adjust to the darkness, barks, branches, even rocks on the ground are bathed in a pale green light. This is what Pandora must look like on the sets of Avatar.

These mountains are home to Mycena, a species of bioluminescent fungus that produces and emits light through a chemical reaction, dependent on the amount of oxygen in the atmosphere. Simply put, during the monsoon, these forests glow in the night. We walk back to our cottages in silence and just on cue, the electricity goes off plunging us into darkness. I enter my room by stepping on patches of glowing green that are almost too beautiful to comprehend.

Rain, thunder, an encounter with a snake and glowing trees.

And this is just day one. Watch this space.

Story 2: The Village of Surla 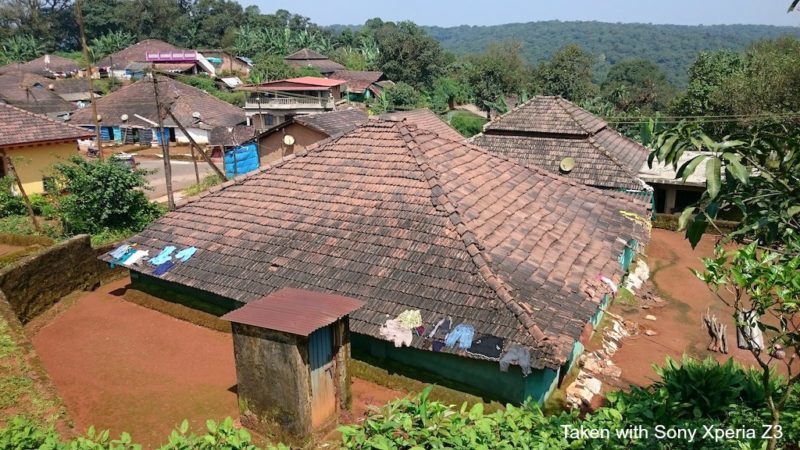 A waterfall pit stop at one of the highest villages in Goa. (Powered by Sony Xperia Z3).

Not starting with Powered by as it is just mentioned in a line above. Story just starts.

A road trip is about the things that don’t find their way into your itinerary. Things that force unplanned stops. Ideally on my itinerary with the Sony Xperia Z3 – after the Chorla waterfall and the bioluminescent fungi – was Ladki Falls, but the village of Surla said otherwise.

One of Goa's highest villages at 800m above sea level, Surla is part of the Sattari taluka of the North Goa district. It sits inside the Mhadei Wildlife sanctuary, surrounded by mixed moist deciduous and semi evergreen forests and is one of the most remote villages of the state. Surla is known for its waterfalls, its cool climate (not unlike a hill station) and beautiful, sprawling high-altitude plateaus of the Western Ghats. 'Devachi rai', the sacred grove is famous for its perennial springs and for its healthy population of sloth bears.

What struck me about this village was the architecture. Look at the photo. Short walls with roofs that go that low to face the changing weather. High-wind velocities, all-day mist in winters and heavy rainfall in monsoons are some of the challenges that nature sets for the residents. Their homes, lifestyles and even some occupations are developed to adapt to these conditions.

Surla can be accessed (by road) from both Maharashtra and Karnataka, but electricity came to this beautiful village only in 2006. Before that, the state of Karnataka would provide electricity to Surla for four hours every day.

Story 3: The Waterfall Trail Through The Western Ghats 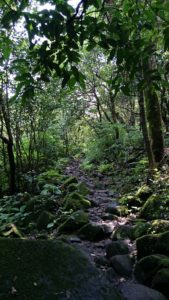 The leech was adamant.

I knew you weren’t supposed to pull these out but the sight of one becoming twice its size by gorging on my blood was fairly disconcerting. The thunder rumbled across the rapidly darkening sky and the relentless rainfall was blurring my vision. I bent forward and tried to scrape it off of my toe, failed, tried again, shook my foot vigorously, swaying precariously till Nirmal Kulkarni, herpetologist and ecologist, who you now know we dragged unwillingly across four waterfalls in the Western Ghats with the Sony Xperia Z3 phone – took pity and got rid of it.

And to think it wasn’t supposed to rain at all.

When I’d touched down in Goa a day ago, the sun had welcomed me terribly warmly. Wildernest Nature Resort was dry – beautiful, but dry. The Southwest monsoon had left, I was told. For someone here to chase rainy waterfalls for a story, I surveyed – with more than a little dismay – the bright blue skies and the sunshine dancing on the bright green plateaus and sent a little prayer heavenward.

That night, the skies reopened over the Goan jungles, as if they had been lying in wait for someone to ask. Thunder, lightening, and a deluge of rain hit the Mhadei Nature Reserve and didn’t stop until after I left for Mumbai. Sometimes, you should be careful what you wish for, I thought as I resignedly battled another leech.

On the bright side, the forests came alive as we navigated them, the rain pouring down waterfalls, racing in the form of tiny streams on muddy trails, clinging to leaves in the form of droplets before splashing merrily to the soaked earth. On each trail, the water filled my rain shoes, deliciously cool and fresh, and the moss that clung to the rocks and trees, exuded droplets when I ran my hands over them. The smell of the wet earth comforted my city-brain in a manner that was almost maternal. The evocative sound of rolling thunder stayed with me for the entirety of the trip.

The more it rained, the more difficult, slippery the terrain got, and in my greed of trying to capture the tremendous show the weather was putting on, thankful for the waterproof feature on the Z3, had more than a few stumbles through the forest. Here is a glimpse of the Western Ghats in the full glory of the monsoon shot with the phone. Walk these trails when you can. You’ll never be the same again.

3 Lesser-Known Waterfalls you must visit in the Western Ghats

Vazra Sakla literally means ‘upper’, ‘lower’. These twin falls thunder down from a height of 140-150m, roaring in the monsoon with renewed vigour. You can’t trek to these falls, but the views from various points in Mhadei are tremendous.

The Chorla Falls are an anomaly. We’ve visited them twice – once at the beginning of the monsoon and the second time, in September. Both times, it looked vastly different and equally gorgeous. June saw a rocky terrain, the riverbed clear of water. We walked right up to the place where they’d crash down into a pool of water just months later. A trickle in June, the Chorla hit a massive boulder on the way down, exploding into a shower of crystal-like droplets that fell on our upturned faces. It was spectacular then and now, with the monsoon behind it, it was truly the most beautiful thing we’d seen.

One of the largest waterfalls in the state of Goa lie in the village of Tambdi Surla (not to be confused with the Surla village we posted about earlier) in Mollem. We drove to Nature’s Nest, a birding lodge run by Ramesh Zarmekar and Pankaj Lad that has become, in a very short span of time, the reason people from all over the world come to Goa for instead of the beaches. Nature’s Nest was set up in 2010 but it quickly moved beyond the scope of bird tourism to local conservation through outreach and awareness programmes. These five acres of land host – along with birds, reptiles and amphibians –plantations of areca nut, banana and papaya.

The 90-minute trek (one-way) to the falls starts from the Mahadev temple at the base and takes you through thick semi-evergreen forests. Also known as the Vazra Sakla locally, these waterfalls are perennial in nature but are truly splendid from June to November when the rains have worked their magic on them. And it really did. Twenty minutes into the trail, the weather changed from sunny and humid to dark and stormy. The rain came beating down on us, as we navigated narrow trails with the forest literally squeezing in around us, making sure we made it only as far as the first stream crossing.

Located in the village of Surla, these falls were named after a local tragedy. Legend goes that a girl named Ladki jumped off this cliff in defiance of restrictions set on her by village elders. I am reminded of the tragic tale of the Noh Kilakai Falls in Meghalaya.