Happy Father’s Day : For the daughters who had to say goodbye too soon 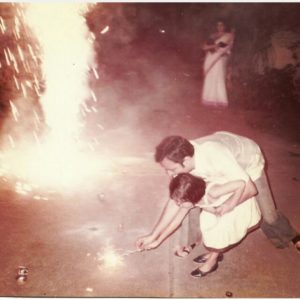 Happy Father’s Day to the daughters who’ve had to say goodbye for good.

The last time death visited us at home I was caught unawares.
In a way that belies logic.

A call in the middle of the night, my mum’s trembling voice saying we’re “bringing him home” because he is unwell, my brother’s repeated “something’s wrong, something’s wrong” while waiting, my body temperature shooting up, burning with a fever I could not understand… all the signs were there, blinking bright red, with flashing lights all around it.

But I got none of it. So unimaginable was the thought that my father – healthy, smiling, handsome, young, unshakable – was dead, randomly while on holiday with mum, that my brain didn’t even acknowledge the universe gesturing wildly, arms flailing, practically shrieking at me to, as they say, look alive and armour up.

I didn’t suspect, even for a second that something calamitous was approaching out of the darkness.

I was a sitting duck when the news finally arrived.

A fish in a barrel.

I didn’t have a chance.

I was wide open.

I was too easy.

This time when death came – again unexpected, again cruel – too close to home, I was prepared. And I realised, as I heard the news in the same room that I’ve been prepped for disaster since that day. Of any kind.

The armour, while it came too late that night, never really came off after.

And while on the topic, I wrote this for Femina some 7 or 8 years ago, IT’S A VERY OLD NOTE so please forgive the amateurish style. But I don’t have anything new written, and this is a wish I wanted to send out anyway.

Happy Father’s Day to the daughters who’ve had to say goodbye for good.

I have nothing against the concept; it’s actually quite wonderful. It gives fathers and daughters a chance to bond again, gives them an excuse to exchange gifts (as if Daddies needed any excuse) and for the less expressive ones, an opportunity to acknowledge each other…

But I approach the day with growing dread.

It will be four years this September that I lost my father to a sudden heart attack.

No major illness, no persistent health complaints, no harmful vices… no warning.

And all this day does is remind me of all that I am being deprived of by just one cruel swipe of fate.

You can read millions of articles on how to deal with death, or talk to psychiatrists about your pain or go for meditation and yoga to find inner calm. You can say to yourself, that your daddy is with you in spirit and that he’s watching over you. And although these outlets may be extremely helpful, the devastating truth is — It’s just not good enough.

Nothing compares to the comfort of walking sleepy-eyed into the living room every morning to see him reading the newspaper.

Nothing compares to the sense of security that you feel when despite your loud protests, he insists on dropping you somewhere just so he is assured that you have reached safely.

Nothing compares to the feeling of individuality that only he could give by asking for your opinion on significant family decisions, even when you were just 12.

Nothing compares to the delight you feel when he expresses amazement at the fact that YOUR birthday is not important enough to be a National holiday.

Nothing compares to the sense of camaraderie you feel when it’s you and your father versus mom and your brother.

Nothing compares to the spark in your mother’s eyes when she gets a pair of earrings from him on their anniversary.

Nothing compares to the feeling of exceptionality he instils in you when he genuinely thinks that your boyfriends are not good enough for someone as unique as you.

Nothing compares with the knowledge that no matter what life throws at you, Daddy will always help you fix it.

And finally,absolutely NOTHING compares to the taken-for-granted feeling that no matter where you are, he is just a phone call away.

No, nothing compares to him being there… in the flesh.

So what do you do?

You take him forward. In ‘Stepmom’ Susan Sarandon, dying of cancer, tells her daughter totake her along in her heart after she dies. She says that’s how people go on forever… because someone carries them along.

So that’s what I will do this year on. You could try it too. Take him along — to your first major business deal, to your wedding day, his grandchild’s birth — to every significant moment in your life… just take him along.

Start by doing things that would make him happy. Anyway, your father’s happiness was most probably wrapped up in yours, so make yourself the happiest you can.

Start by not flinching and turning away when you look at his photograph. Start by accepting that though the void that he has left behind will never be filled again, he will live on through you.

And quite a life it will be, make sure of that.

After all, you are your father’s daughter.