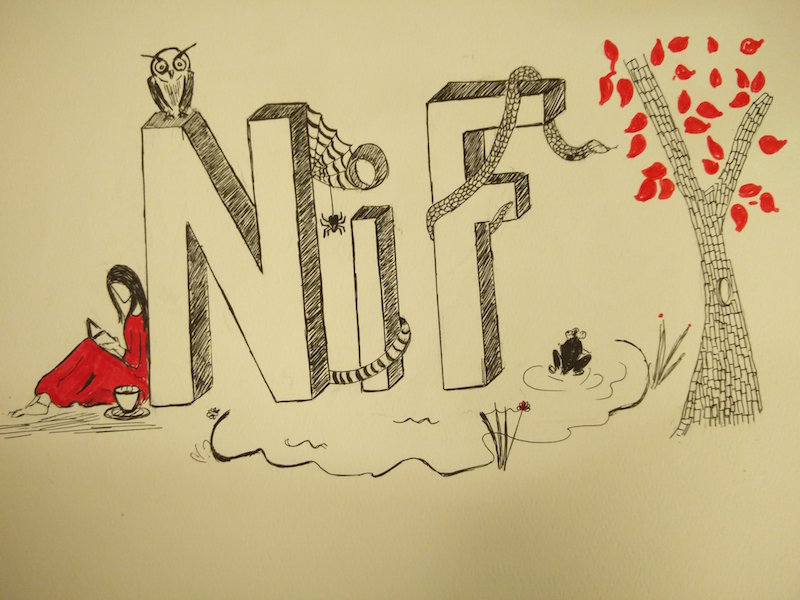 It seemed wobbly on its feet. It looked around the office, walking unsteadily, almost falling over a couple of times.

Sit. Not so fast, sit down.

It sat. It was far from ready. No muscle power, yet, just a skeletal thought but already ready to go. Plucky thing. I said so to Rohit. A strong spark, this one. He said he was delighted I saw it too. And that It needed time and attention, but above all, it needed to talk about itself. A lot.
Fortuitously, I’m a good listener.
I hugged Mumbai, the love of my life, a temporary goodbye, and moved to Bangalore.

We spent hours with it every day. I took copious notes, scribbled on every whiteboard in the office, wore out an alarming number of markers and terrorised Binon, office Man Friday, for endless cups of his excellent tea. But for the most part, I questioned it.

A part of you exists already. The annual festival has a strong vision. Are you an addendum?
No.
A placeholder for the festival?
Nope.
Why not?
It looked at me as if the answer was obvious, and then slowly as if speaking to a child…
Because of the stories.

It showed up to work every day, sometimes yielding, charming even, ready to talk, at other times, reticent, infuriatingly obtuse.

Is there someone out there already like you?
No.
There’s some overlap, though.
That’s just unavoidable.
So, how are you different?
Aren’t we all?
What’s it like to speak with you?
You’re doing it right now, so I am assuming that’s a rhetorical question.

And on some days, it wouldn’t engage at all.

Why should anyone speak with you when there are others like you already out there?
*Silence*
Who’s reading you? Who do you want?
*Silence*
What do you want to say? What do you stand for?
*Shrug*
Are you political? A romantic? Are you a traveller? A conservationist? A mentor? A guide?
You know nothing, Jon Snow.
Wise-ass.

Those questions were the hardest to get right. The more I discovered about it, the surer I was that it wouldn’t be happy as an also-ran to anything, be it the festival, or other magazines. No, this one needed its own playing field. It had a universe inside it.
We talked about storytelling, about conservation, about the importance of balanced photography, the necessity of purposeful writing, of strong on-field reportage. The more we spoke, the more I understood it, and though it would willingly disintegrate before admitting it, it had begun to trust me, with no small amount of curiosity, too.

Do you miss Mumbai?
Well, I miss the rain.
You do realise it is raining here, too.
Please! The Mumbai monsoon is a thing to be reckoned with – a fierce, no-holds barred spectacle. All or nothing.
Do you like Bangalore?
Food’s great, weather’s gorgeous. Navigating my way around the language, *swalpa swalpa.
And your family? You miss them?
I do.
And you’ve moved here just for me. To ensure I am ready.
I have.
Hmm. All or nothing.
I suppose so.
Am I worth it, so far?
You? *Kashta ide.
It laughed. Tumba kashta ide.

I was hopelessly infatuated. I should take this slow. But then, I’d already moved here, I’d already put my family, my writing, my life on hold for it.
We were past slow. We looked at each other. Hook, line and sinker.

I introduced it to Radha Rangarajan, Editor of Photography, and that was the start of a beautiful friendship. It knew I’d chased her to the moon and back for it and took to her gentle and intuitive nature like a fish to water. They discussed photography and perspectives in a language in which I was less fluent: composition, frames, contrasts, shutter-speed, lens sizes. I saw how amenable it was to her expert handling. Under her care, it rose. It blossomed.

We showed it off to a few friends, whom I knew would ask it tough questions – maybe some I’d missed asking. And with incisive clarity of thought, Bijal Vachharajani, Maegan Dobson Sippy, Vivek Muthuramalingam and Zara Khan, gave it the leg up that it (and I) needed so very much at the beginning.

But I was eager to see how it wanted to present itself. Cue the Art Department. It allowed Abhilash and Shibin to take a look at it. It needed a look that said everything worth saying about its intentions. It took a while to get there.

What do you think of this template?
Too attention-seeking.
This one?
Too plain.
What about…?
Really? Do I seem like a 16-year-old schoolgirl?
I went through 10 cups of tea a day.

It threw violent tantrums when it was put on hold while other work took precedence. But amid all the fire- fighting and volatility, it found what it wanted. I was slayed. The boys had made it everything we’d thought it would be: classy, minimalistic and drop dead gorgeous.

Then it met Nelson – the one-man tech army that created a map for its road to self-discovery – and something fundamental changed at this stage. It realised that it would be denied nothing around us – interactive canopies, moving video headers, perhaps Nelson’s own kidney if it’d asked for it. They discussed algorithms, navigation, lines and lines of code.
It understood then that it was in the enviable position of an advantage.
It tasted power.
And it was at this stage, when its core code was being set, that it was at its most temperamental.

On November 30, 2016, it went live. We watched it walk out into the digital space, a world full of trolls, haters and people who’d fling garbage at each other if it were socially acceptable to do so. I held my breath, preparing to comfort it if it fell. It held its own. Of course it did. I should have known better.

Over this year, it has met some extraordinary people: Associate Editor, Amrita Gupta, who ensures it is always saying exactly what it means and gives its words the finesse that charms the socks off readers; Ryan Venattu, the latest addition to the design team who, along with the rest of us, spoils it silly, and Aadya Singh, who finds stories from around the globe for it.

Then it met Kalyan Varma. It had heard so much about him that it was uncharacteristically shy (none of the smart mouth it used so generously on me). Gradually, they found common ground, reaching a place of comfort and mutual admiration that has since resulted in a strong partnership.

And last but not least Rohit Varma, who conjured the very thought of it out of thin air, who dreamed relentlessly of it, who shouldered the considerable weight of its vision even before I met it. Rohit pretty much runs himself to the ground caring for its upkeep, filled with pride even while it cheerfully bleeds him dry, and yet, he’d do it all over again in a heartbeat.

This group of people does its bidding, every day, all day. We could be at office, at home, on dates, we could be on an alien rocket ship careening towards the sun, but when it calls, we answer. I’ve long since moved back home to Mumbai, but I fly to visit it every month, splitting my already considerably chaotic life between two cities. This group of people is in love, and it knows.

I watch it now. It’s no longer uncertain or wobbly. It has found firm ground. It takes compliments with ease and grace, no longer an excitable novice. It is aware that it is unique and for that it has garnered respect. In a brazen display of role reversal, it has started to tutor us, too. It forces me to read more, concentrate on the less obvious creatures, it has taught me the unparalleled value of fieldwork. It has also come to know me, just as I know it. It knows a year has gone by and I am already restless. It knows it needs to challenge me, challenge itself to do more, reach more.

Look at you, a year old, already.
Yep, y’all did good.
So did you.
Well, d-uh. What’s next?
You’re flesh and blood, and very much alive.
So now?
Now, it’s time to flex those muscles.
All or nothing?
All or nothing.
Let’s go for gold.

(A huge shout-out to everyone, not in this note, who helped NiF along, and especially the entire team of RSquare Consulting for their support)