A Non-Biker On The Himalayan Odyssey 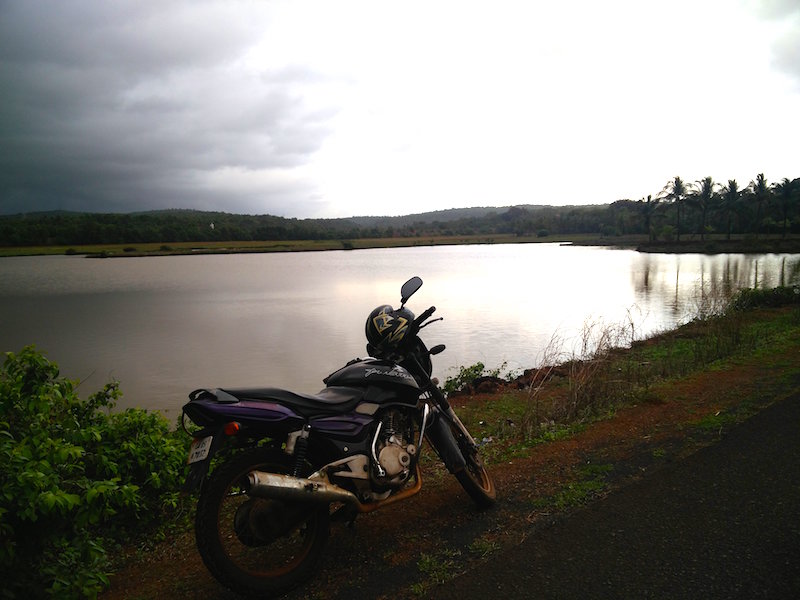 “Can you ride?” one of the participants asked me, as he adjusted the strap of his helmet.

“Are you riding pillion?”

“Are you a biking enthusiast?”

“Are you covering the Odyssey for your magazine?”

He stopped fiddling with his helmet and looked at me.

‘So what exactly are you doing on a biking expedition?’

I had decided that I would punch the next guy in the group who asked me that question. Mainly because they all had a point. What was I doing there?

I had been on a bike four times in my entire life. Though I completely understood the appeal of biker boys, I have never felt a strong urge to know the vehicle better. All this talk about handlebars, Bullets, Thunderbirds, saddlebags seemed completely alien as the guys around me obsessed about their bikes, their friends’ bikes, bikes they wanted to own, bikes they didn’t… etc, etc ad nauseam. The fact that the organisers made me sign an indemnity form that freed Royal Enfield from all blame if I, say, fell off a cliff and died, wasn’t too comforting either.

There were two women participating in the Himalayan Odyssey, and the third was riding pillion. They were my excuse to be there: To cover the ride as an adventure story for Femina, following the riders in the press car. But the truth was that I had jumped at the opportunity of a road trip to Leh Ladakh. The focus of the trip at that point was me. I didn’t care about ‘the ride’. And I certainly didn’t care that I wasn’t riding.
Just goes to show how little I knew then.

The morning ride out of Delhi was my initiation into the biking community. Sushant generously let me ride pillion with him as 50 powerful Enfields made a grand and noisy exit out of the city. The bikers gracefully entered in and out of formations, flags fluttering in the warm breeze, stopping traffic, and waving at an awed and gawking public. I, of course, had already committed my first cardinal sin; I had ridden without a helmet and was unceremoniously banished from riding till I corrected that. Undeterred, Sushant and I went helmet shopping in Ambala. I put one on and stood there like an ungainly astronaut, trying to balance my head when he asked me if I was comfortable. Now, I had never worn a helmet in my life. Of course I wasn’t comfortable. I finally bought one too big for my head. I had so much to learn.

A few days and a couple of pillion rides later, I began warming up to the Bullet. One night, around a merry bonfire, the guys sat me down and under the guise of trying to educate me, mercilessly attacked my appalling pillion skills. There was a good deal of laughter when I confessed I was doing everything wrong.

“When you’re on a bike,” said one smug so-and-so, “you move according to the rider. You balance the potholes. Which means, another grinned, “You watch the road.” I smiled. Through the entire gorgeous terrain from Delhi to Leh, I had looked like I’ve come from the village to a big city. Or like a kid in a candy store. Eyes wide, happy grin, head moving to an invisible tennis game, this side, that side, all around, the sky, who’s behind—and repeatedly managed to crash my head into the rider’s helmet because I wasn’t paying attention to the road.

"Being a good pillion is vital," said one of the riders.
"Yep, there are articles written on it," another adds, importantly.
I tried to keep my sarcasm to a minimum. There were people actually writing about how to sit on the backseat of a bike? How mental do you need to be about your machine to do that? This led to another discussion on why men love bikes.

“It’s the speed,” said one.
“The freedom,” stated another. “The control.”
But the freedom from what? Control over what?
They tried to explain. I pretended to understand.

But the next day, we left the city behind and buildings morphed into faraway mountains. From the backseat of the bullet, I looked at the river racing us on one side and the vast empty green spaces on the other, the trees whizzed past and the sky darkened with the promise of rain. It was then, speeding on that wide highway to Manali, listening to the powerful sound of the engine and the roar of the wind, that I finally understood what the boys couldn’t articulate. Zooming along on this road I felt an almost euphoric sense of contentment. I felt that nothing, absolutely nothing could touch me here.
I was free.

Good pillion or not, I was now quite fond of the machine. On the way to Sarchu, we crossed Baralachala La at a height of 16,500 feet and after which the tree line began to fade and the terrain became increasingly rocky. Majestic, jagged mountains rose all around us through the journey. I had never imagined that the beauty of bare, stony, cold mountains could take my breath away. But they did, in more ways than one. Altitude sickness hit at Sarchu in the form of a slight headache, which quickly accelerated into nausea and frequent vomiting. Through the night, I gasped for air, and the biting cold actually made my bones ache. It rendered me so weak, I found it an effort to move my head from one side to another and just for those few hours, I wanted to be home, safe in my bed.

The next morning, still exhausted from the lack of sleep, I trudged out of the tent feeling like a train-wreck survivor, and sank down on the grass, grateful for the warm sun on my back. I sat like that for a while, studying the unrelenting mountains. As I looked at the sunshine warming the rocky slopes, I realised that it didn’t matter how I felt. This wasn’t about me. It was about them, the mountains. They’re there and that was all that mattered. If I wanted to be there, I had better be strong enough. That was all it took. By the time we reached Debring, I was almost completely acclimatised.

By the time we made our trip from Leh to ‘the top of the world’ at Khardung La, at a towering 18,380 feet, my entire perspective had switched from that of a car windshield to that of a helmet visor. Whenever we hit bad roads or water crossings, I immediately stopped to see if the riders made it through. There was a feeling of oneness in the group. By now, friendships had been forged and formed, small clusters rode together, and every time someone overtook the other, they exchanged a salute or a thumbs-up sign to acknowledge the great feel of the ride. At Khardung La, I clapped and cheered their achievement with them loudly enough to cause an avalanche and even though I wasn’t riding, I felt bound to the Odyssey in a way I have yet not figured out.

I have gone through life without registering the sound a bike makes. And here, I was waking up everyday to 50 bikes revving up. I have come to love that sound.

Whenever I was not allowed on the bike (the roads aren’t exactly safe), the riders would try to smuggle me on their bikes. They couldn’t imagine how I could be happy sitting in the car. For them, that would be missing the point of the experience.

I don’t know that for sure, but I am ready to find out.

My riding lessons begin this Sunday.